I really don't think I need to say anything - This Old Spice ad can speak for itself. :)
Posted by Jessica at 6:34 PM No comments:

Now for something completely different

What if life really were like this? What if you met people and decided in the first 2 seconds whether you were going to bother talking to them? Just from the way they looked as a floating head on a monitor?

There's been a lot of talk about Chat Roulette lately. I, personally, am glad (thrilled?) that we don't decide the fate of a potential relationship in the first 2 seconds. For people like me, who take a few minutes to warm up and get a conversation started, this would be the death knell for any social interactions I might attempt. "Uhm... are you mute?" would be the FAQ before they reached out to click the "pass" button.

I came across this short film about it, which I found interesting, so here you go.
Posted by Jessica at 2:42 PM No comments:

My daughter does not need my kidney.

If you've been reading my blog lately, you'll know that my daughter has been sick. She's going to the hospital to see the Paediatric Nephrologist on Wednesday, where they will do things like test her blood and urine... I actually don't know what else they will do. Since I don't drive, my husband will take her, and I'll sit at home worrying the whole time.

This morning, at 2am, as I held Baby B on one hip while changing the pee-soaked sheets in her crib with one hand, I was trying desperately not to wake Big B. (I think I deserve a round of applause for that one, actually -- and a new baby monitor, as I was apparently not heard hissing "I need some help!" into the monitor microphone.) I really, really want her to get all the sleep she can right now... the swelling seems a lot better when she's been well rested.

After I got Baby B cleaned, changed and back down in her fresh crib, I couldn't sleep. I just lay there thinking. Worrying. Planning. What if this is something worse? What if her kidneys have been affected? Then I sat bolt upright. "What," I thought, "if she needs a kidney?"

Sobering thought at 3 in the morning. After two hours of planning out the babysitting details for the time I'll need to give my daughter one of my kidneys, I finally fell asleep.

So, while my daughter in all likelihood does not need my kidney, she's welcome to it. But I'm gonna need some babysitting.
Posted by Jessica at 2:19 PM No comments:

The thing my daughter has is called HSP (Henoch Schonlein Purpura). The first time she had it, it started with a week of vomiting, followed by a week of swollen joints followed by more vomiting. All the while, she was also lethargic, had no appetite and was unable to sleep through the night due to abdominal pain.

We actually cheered when she ate a piece of ravioli. It's only been two weeks since she was healthy enough to go back to school, and now it's back.

All I know is this: it's not fair. She's so small... last time she had it, she lost 5lbs. due to vomiting and not being able to eat - the kid only weighed 35 to begin with! I hate this so much. As well as being awful for her, I'll be honest, it's really hard for me. Not only is everything made that much harder because I've basically got to do everything for her, but I'm scared. I'm constantly worried that something that is already so hard on her is going to turn into something worse.

She's got an appointment with the pediatric nephrologist (kidney specialist - I had to look it up.) on Wednesday, and I don't even know what it is they're looking for. Is it possible that her kidneys have been damaged? What would that mean?

There's nothing scarier than something that you don't know anything about; except maybe when that something is happening to your kid.
Posted by Jessica at 1:31 PM No comments: 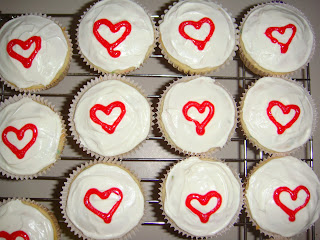 Valentine's day has come and gone, yet again... did you feel loved? I did.

Valentine's day is also the anniversary of my first date with my husband - convenient, eh? This year, I think I got the best present I could ever ask for. He promised to clean, de-crap and organise our abode. I like chocolate and flowers as much as the next girl, but organised closets? HEAVEN.

We've been living in our current apartment for about 5 years - since just before Big B was born - and we've still got things hiding in boxes. Until this last summer, we had a row of rubbermaid bins piled two or three high lining one wall; then we discovered garage storage. It's very very rare that we need to open one that isn't clothing that's been stored until Baby B grows into it after Big B grows out of it. We've been working on getting our shit together to get a house to move into and raise our kids and plan on moving in a year or two. I guess Husband was listening when I said to him one day "what's the point of moving into a house when we've got so much crap anyway that it'll be crapped up as soon as we move our stuff in?" (I'm so eloquent, aren't I?)

So on Valentine's morning, I woke up to breakfast in bed; which I totally appreciate - he even made me tea, due to my recently (and unsuccessfully) swearing off coffee. The day got even better as he did laundry and dishes without my asking and helped me set up for our Valentine's tea party. Then to announce this crowning glory of a present - it just made me fall in love all over again. It really is the little things.

Sort of related - I read a really great post over at Her Bad Mother: Love In The Time Of Internet.
Posted by Jessica at 9:16 PM No comments: 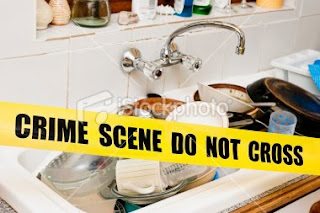 My oven has been broken for two weeks. Not until something is missing, do you realise how much you need it. Up until now, things like fish sticks and pita pizzas have been staples in my protein avoiding, vegetable fearing older daughter's diet. I sneak zucchini and carrots into banana bread, there's chick peas in the muffins, I've actually called baked yam rounds "cookies" ... and now? She eats canned ravioli. It's not much good making her a nice batch of steamed yams and cauliflower because she just refuses to eat it. Heaven help us if I present her with something green!

We've also been feeding her whatever she asks for because for those three sick weeks, she ate practically nothing; that's a whole different problem.

Finally though, after a snafu with a part, the repairman will be coming back for the second time, this time to actually fix the oven (fingers crossed). I'm practically salivating to get a loaf of banana bread going. Of course, since the repairman is coming, I've spent the morning cleaning. I can't be the only one to do this; any time a stranger is coming over, I spend ten times as long cleaning. Even when it's a repairman who (again, fingers crossed) I will never see again. Last time he showed up at dinner time, while I was in the middle of feeding the girls. I had a smear of ravioli on my cheek, the kitchen was a disaster and I hadn't combed my hair since the morning before. I don't think I was wearing a bra. For some reason, I found all of this profoundly embarrassing and couldn't look him in the face the whole time he was here.

Then I realised that if I hired someone to come in and clean my house for me, I would spend the two days before they came cleaning the house. What would this person judge me for? I certainly should get anything embarrassing out of the bathroom... would she look at my books? What does that DVD say about me? Also, once I'd cleaned everything up, I'd have to artfully arrange some mess so that she'd have something to clean. All in all, just too much work.

I'll let you know if the oven gets fixed.
Posted by Jessica at 1:15 PM 1 comment:

So. My husband is playing bass in a show. This show ran for 12 (14?) weeks from November to January and left me a single mother. I did not enjoy the show. I enjoyed the actual show - it's a great show; I didn't enjoy the single motherness. I kept finding myself saying things like "If I'd wanted to be a single mother, I wouldn't have bothered getting married!" and "why don't you just move out?!" Seriously. It was bad.

Tonight... it begins again. He's gone for the first rehearsal now that the show has been re-mounted, and already I'm feeling the pain. I'm normally a very strong person, but I'm also a stay at home mum; I NEED someone to come and help me with the kids after I've been here with them all day. Luckily, this time it'll only be twice a week or so. I should probably warn him though, that the nights he is home, I will be shutting myself in the bedroom as soon as he gets here and not coming out until it's time to kiss my sweet angels goodnight. Or maybe not.
Posted by Jessica at 7:43 PM No comments:

I haven't written since my last post about Big B being in the hospital. She's been sick.. she actually had something with a name - scary. She had swollen joints, a rash that actually wasn't a rash, but burst blood vessels and she was throwing up all the time. Not a pretty thing at all. She is, however, all better now. There is the possibility that this thing caused some kidney damage and we will have to take her to a kidney specialist to make sure, but the chances are slim, and I choose to ignore them for now.

My little angel is back to her boisterous, argumentative, smiling self! I didn't know how worried I was until I dropped her off at school this afternoon, for the first time in a while, and almost cried. She smiled and ran off to put her coat in her cubby; now I can finally believe she's better.