Shut Up and Drive.

When I was sixteen, I didn't really see the point of getting my driver's license. Not only did I live right downtown, but I had a boyfriend with a license. I also had a brother with a license.

When I was older, I took the TTC a lot. No one in university had a car, so we were all transit dependent.

I took my first road test when I was 26 and nine months pregnant. I failed for being "too cautious." Really? Really?

Anyhoo... that is how I came to be a grown woman with two children and no driver's license.

In Toronto, you really can get by without it. Transit goes pretty much anywhere I need to go. (Except Michaels, but it's really not a good idea for me to be able to go there anytime I want anyway.) Besides that, whenever the car is home, so is my husband (aka: chauffeur).

It's not like I haven't tried - I started the process when I was 21. I wrote the first test, passed with flying colours and then took a driver's ed. course. Then I never got around to taking the road test, because we didn't own a car anyway.

So. Five years later, I wrote the test again. This time I actually booked the road test. With a baby on the way, it seemed like a really good idea; plus we had a car by then. As mentioned above, I failed. For being too cautious. (Can you tell I'm still irked about that?) 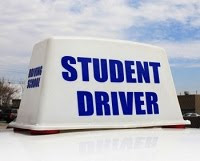 For those of you not familiar with (the completely aggravating system that is) graduated licensing, here are the basics:

First, you write a test on road rules and signs, etc. This gets you your "G1" license. Which allows you to drive, but only with a grownup (ie. someone with more than 4 years of driving experience and no alcohol in their system).

Then, after a year, you are allowed to take your "G2 exit test" which includes driving on the highway. This gets you your "G" license which lets you drive around in your car, all by yourself, like a grownup.

I've been going through some stuff lately, and this whole driving thing was really not at the forefront of my brain. For some reason, yesterday I thought about it. What was that niggling thing at the back of my mind? There's something I have to do...

Oh. Right. If I want to keep my current level of driver's license (G1. Yes, I need a grownup.) then I need to go and write the test again. By November 3rd. Awesome.

If I pass, then I can schedule a driver's test without waiting for 12 months. If I fail, I start the whole stinking process over again. Again.

So. I'm asking my husband (very nicely) to take a day off on Tuesday to drive me to the testing center (and apologising for being such a bonehead the whole time).


*I'm really hoping this doesn't apply to "mature" drivers, or one of my kids is out of luck.
Posted by Jessica at 12:18 PM