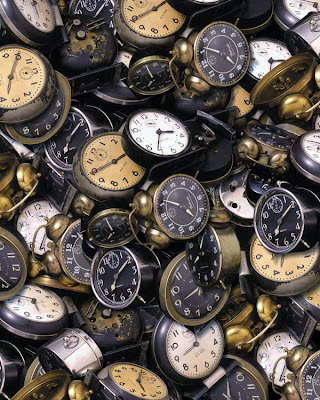 Well, it's that time of year again: Daylight Savings Time.

Unlike a lot of people, I don't have that much of a problem with it. I tend to naturally adjust anyway; I've had a real issue getting up before 7:00 for about three weeks now, waking up at 8:00 on the dot. It'll be a relief tomorrow when I don't feel so much like a zombie when I get up at 7:00. Which used to be 8:00. You know what I mean.

The idea that there's one day a year when you're essentially guaranteed an extra hour sleep doesn't suck either.

Which is why I've been up for an hour with her now, trying to explain that no, we can't watch "kid shows", because we're up earlier than the freaking cartoons.
Posted by Jessica at 5:51 AM