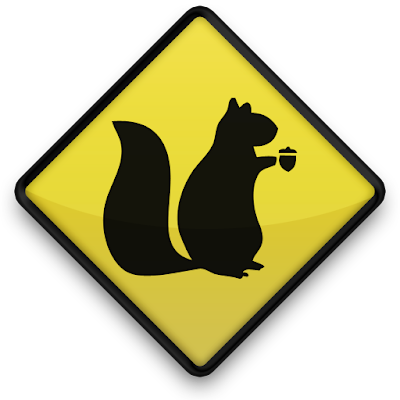 I don't know what it is about this neighbourhood, but people seem to really hate squirrels. Judging from where their stiff little corpses end up, I'm guessing at least a few people have actually swerved to hit them.

This makes things a little difficult for me (and I'm sure it pisses the squirrels off too).

You see, Kee loves squirrels. Just loves them. She calls them "Loolies."* She likes to stop when we see them so that she can watch them for a while.

Luckily (for me, not the squirrels) most of the ones we have come across (and there have been a LOT of them) have been so squashed that when she asks what it is, I can say "oh dear! Someone seems to have lost their mitten!"** Or hat. Or scarf. It really depends on the size of the deceased.

Today, there were refreshingly few "mittens" in the road.

There was however, a duck. A live duck, walking down the middle of the road. It was a beautiful duck, obviously young. Drivers were going slowly to avoid it and being careful of it, thank goodness, because Kee was enthralled.

Then, as we sat watching, a big white SUV came roaring down the street and ran right over it.

Miraculously, the duck, after a flurry of wing beating and furious quacking, righted itself and was fine. It made it the rest of the way across the street and waddled into the school yard, where I figured it would be safe for a while.

Kee and I high fived and continued our walk.

When we came around the corner, the duck had come through the school yard and was now wandering towards the road again. A much busier road than the one it had just nearly been killed on. I tried to distract Kee, but she wasn't having it. She wanted to watch the duck.

So, we stood at the side of the road and watched the duck step into the road, crossing our fingers and whispering "go ducky, go!" to each other.

Thankfully, these cars were much more polite than Mr. White-SUV and they all paused as the duck daintily waddled to the other side. We hugged and cheered, thrilled that the duck was safe.

Then I suggested to Kee that we run all the way home just to see if we could do it; which she thought was a great idea.

Which was a relief, because the idiot duck had turned back around and I really didn't want to see if it got flattened by the bus that was coming.

*Not entirely sure why, but I blame TV.
**I think this qualifies as one of those times where the truth will result in more therapy than a lie.
Posted by Jessica at 11:58 AM