My husband and I have known each other for quite a while now; we met at Frosh week when I was nineteen. We're coming up on our thirteenth anniversary*. That's a pretty long time, really, and there have been plenty of gift giving opportunities during that time.

He is totally easy to buy for: if there is any new Star Wars anything, my shopping is done. Failing that, anything kinda nerdy-cool will do the trick. One year, when I couldn't think of anything else, I made him a Star Wars themed bean bag toss game. 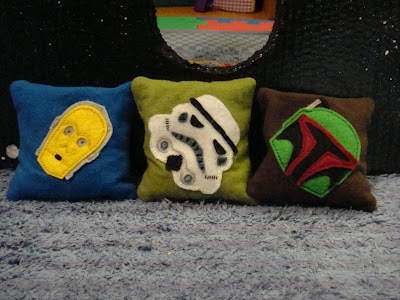 I, on the other hand am (apparently) not quite so much of an open book.

This has resulted in some... odd... presents. He has given me the standard things like flowers, chocolates and jewellery... but he also gave me a hammer** for our anniversary one year.

This year, for my birthday, dude gave me twelve pounds of felt. 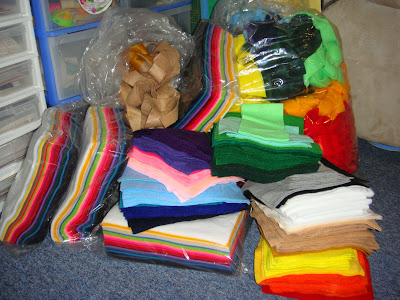 I'm thinking that perhaps my lovely husband didn't realise quite how much felt twelve pounds would be.*** Or maybe he just wants bigger bean bags.

Just so we're clear, everyone I know will be getting presents made of felt until the end of time.

*Holy crap!
**I actually did want a good hammer, just maybe not for our anniversary. I decorated it with heart stickers to make it more "romantic".
***See that little brown thing on the right hand side of the picture? That, dear friends is my lazy-boy reclining couch. Being dwarfed by bags of felt.
Posted by Jessica at 11:08 AM

Labels: birthdays, felt, I love my husband, I've got too much crap, NaBloPoMo, stuff I make