Hooves and Other Problems.

So. We bought Beege some "indoor shoes" for school. They were plain, purple and white runners. She liked them, I liked them and they were $9.97, so everyone was happy.

Unfortunately, as we found out when she was running through the house after practicing tying her laces, they do not have "non-marking" soles. My husband spent 20 minutes on the kitchen floor with a baby wipe cleaning up shoe trails. This quality eliminates them from the "indoor shoes" category.

Let me tell you something about Beege: she is entirely practical. When she was three and we were buying her winter boots, she picked up some cute little suede boots with embroidery on them and a flat sole. I picked up some big heavy ones with a grippy sole and elastic around the top to keep the snow out. We discussed the benefits of both pairs, and in the end, she decided to buy the heavy ones because she "would only be able to wear those ones in the house!"

When we went shopping today, we knew exactly what we were looking for: running shoes with white bottoms. Which was actually surprisingly difficult. Why all the black soles? Don't shoe manufacturers know the non-marking sole rule?

Anyway, Beege finally found an inexpensive pair of runners in her size with a white bottom. They were round-toed and lumpy and oddly bulky. They looked kind of like what I imagine Frankenstein's monster's shoes would have looked like if he'd been a five year old wearing non-marking runners. She was perfectly happy with them. Ready to go to the checkout.

I, who am usually the most practical and cheap frugal person who avoids the character covered stuff because I know it adds $10 as soon as there's a Disney anything involved, convinced her to buy these. 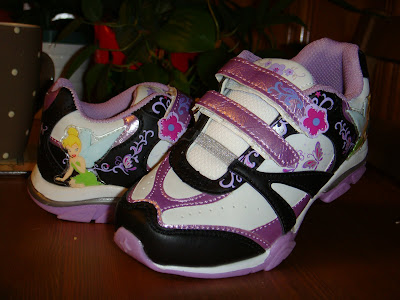 Apparently, while I am totally okay with walking over to the school with my hair in a messy lump on my head, wearing my pajamas, and having forgotten to brush my teeth, I cannot let my daughter have monster hooves.
Posted by Jessica at 10:11 PM