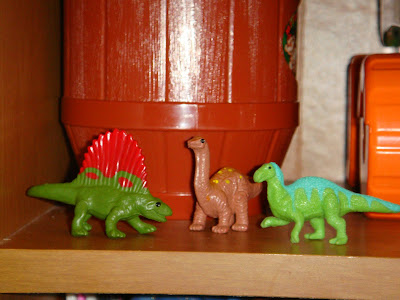 So, one morning, we're getting ready to go, and Kee starts loading her pockets with tiny dinosaurs. I told her to pick something else, because I didn't want them to get lost. They won't get lost. They might get lost. They WON'T GET LOST! Fine. I let her bring one dinosaur. So she picked her favourite one, who she calls "Stingosaurus."

After dropping Beege off, we went for our walk. About a block in, Kee screams "STOP! WHERE IS STINGOSAURUS?" So, sucker that I am, I backtracked a little bit until we found him. This happened three more times.

We finally made some progress while she ate her snack. As soon as she finished though, "STOP!" We backtracked for about three blocks before I finally decided that Stingosaurus was well and truly gone this time. I would just have to tell her that we weren't going to find him and brace myself for the drama that would follow.

Me: Honey? I don't think we're going to find him.
Kee: Why NOT?!
Me: Well, we probably dropped him a while ago. I haven't seen him on the ground, have you?
Kee: Will we find him tomorrow?
Me: Probably not, sweetheart. I'm guessing that some other kid has found him by now.
Kee: ANOTHER KID?!
Me: Yup! I bet another kid who will love him and play with him found him. So he'll be very happy.
Kee:...
Me: I bet that other kid will take very good care of him.
Kee: He will?
Me: Yup.

I was pleasantly surprised when she just looked at me suspiciously for a minute and then mumbled "Okay." and settled back in the stroller.

Feeling very pleased with myself, I continued down the street.

A little while later, we walked past a playground where there were a bunch of kids playing. "STOP!" I stopped, and looked down at Kee. She was glaring and pointing towards a kid on the playground.