The other night, I felt ill. My husband felt ill. My children were being horrible, and so I decided to assume that they too were feeling ill. We decided not to cook. Husband said he'd run to the grocery store and pick up something at the ready to go counter. He asked me what I wanted, and I (so helpfully) replied "something meaty. And... like... saucy. Comforting. You know? Like... uhm... no pasta. But meaty. You know! Something that will make me all warm and ... comforted."

Doing his level best to accommodate my refusal to actually name something I'd like to eat, he brought me some Pad Thai with chicken and Shrimp (which was delicious) and some Shepherd's pie (which was disgusting and greasy*). Neither of which were quite what I wanted, but I devoured them, felt warm and full, and fell asleep.

What I really wanted (but failed to articulate) was chicken pie. A nice chicken pie, full of veggies, and oozing gravy.**

So, the next day, feeling infinitely better and having some time on my hands, I dug around in my fridge and freezer and came up with this: 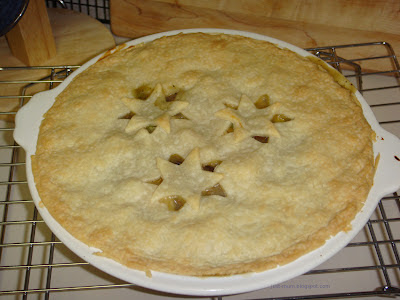 Kick-Ass Chicken Pie
You'll need a pie pan/dish - I used a shallow ceramic one that I got from my grandma. (It's apparently magic because nothing that wasn't tasty has ever resulted from using it.)

(My chicken breast started out frozen -- cook your chicken according to whatever method you prefer -- so it went into the oven at 375 for an hour and came out at the perfect time to combine with everything else.)

Preheat oven to 375 (may vary, depending on what your pie crust says).
Remove your pie crust from the freezer and let it thaw on the counter while you do all this other stuff.

In a medium saucepan, melt butter. Add onions and garlic. Saute until translucent. Add carrots and celery. After about 5 minutes, add peas and corn. Once the veggies are heated through, add the chicken broth. Simmer on the stove for about 10 minutes.

In a small bowl, combine the flour with the spices. Add this mixture, bit by bit to the saucepan. This is to thicken the broth up and make that excellent chicken pie gravy. You don't want it to get sludgy though, so seriously, add it a little at a time and see how much it thickens up; you may not use all of it. That's totally fine. Add the mushrooms at this point; if you add them earlier, they get all limp and soggy. Now is also the time to add those chicken chunks.

Once it's a consistency that you like, it's time to scoop it into your pie pan. (Don't worry if you've got a bit too much filling for the pan; just eat that up, it's yummy. I won't tell anyone.) Cut some slices in the pie crust to allow steam to escape (or use a cookie cutter to make pretty shapes) and cover your steaming delicious pie innards. Put it in the oven. At this point, the filling is already fully cooked, so you're just baking long enough for the crust to get crispy and golden brown (about 15-20 minutes).

Let it cool slightly so that the gravy can thicken a bit - or eat it runny, it's still delicious. 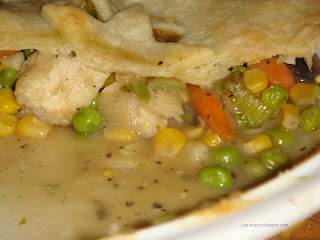 *They were from Metro (which used to be Dominion), in case you were wondering.
**Which, to be fair, he did try to find but they didn't have any in the "ready-to-go" section.
***Mine is "Club House" brand and contains: thyme, sage, marjoram, rosemary, black pepper and nutmeg.
Posted by Jessica at 11:30 PM

Labels: being sick sucks, chicken, chicken pie, I can cook, I love my husband, pie, recipe