Of Mice and Birthdays.

The other day, my husband came home from work and found a dead mouse hanging out of the ceiling. For some reason, I thought it would be a good idea to go look at it, before he got rid of it. Something about knowing where to look to avoid mice falling on my head.

I have never been so grossed out in my life. And I don't even know why. The poor thing (much as I hate them, I still feel bad for them) was hanging out of the air vent, as though it had tried to jump and gotten it's tail caught on something. In other words, it didn't really look very dead, suspended there. 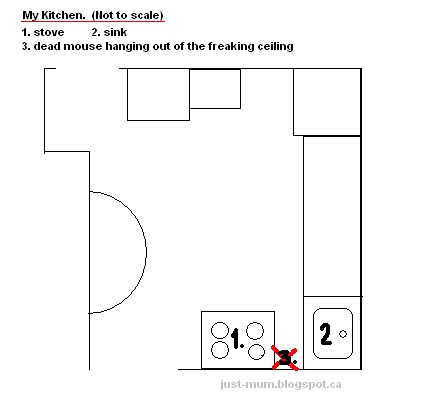 I freaked right the frick out. I got the shakes, and I just could not get warm. I kept crying and mumbling nonsense. I kept wondering how long the thing had been there. Had it been hanging over my head while I cooked dinner? When did it die? Had it been watching me? While I made myself a cup of tea? While I did the dishes? Had it been there all freaking day?

I'm trying to pretend it didn't happen, but I can't seem to talk about anything else.

Okay, here's something non-mouse related: It's Beege's birthday! My tiny baby is seven years old today. Which makes me so happy and so sad. She was the most wonderful baby, and she's grown into a totally amazing little girl. She makes me proud every day, even when she's not at her best; and let's face it, seven year olds can be jerks.

In celebration of her birthday, she has requested blueberry muffins and homemade pizza for supper, followed by a trip back to school for movie night. Madagascar 3. Apparently it's hilarious. And not about mice, so I'll be fine.