Well, today's the day! You can tell how long we'll be gone by looking at the weather forecast - looks like it's going to rain from the second we set up our tent 'til just before we take it down. Woo hoo.

The kids are packed, transportation is arranged, we've got loads of food, and a selection of activities. Husband has stocked the cupboard with ramen noodles and made exciting plans to play "scary" video games while we're gone*. Now if I can just get it together and pack my own stuff, we'll be all set. 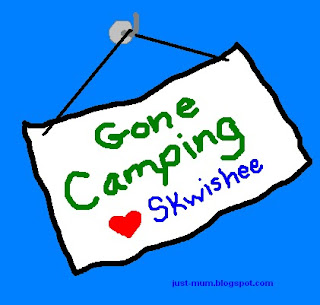 *I've told him he should also feel free to listen to music with swearing, watch something other than cartoons, and dance around in his underwear if he likes.
Posted by Jessica at 9:05 AM 4 comments:

If you were around last year, you may recall something I did with the girls called "Camp Woodchuck." It went so well that the girls were asking when we would do it again on the way home. So, we're getting ready to do it again on Wednesday.

Last year, I went a little loopy, making buttons, notebooks, banners... I may have set the bar a little high for myself. I'm trying not to go quite so nuts this year, but I can't help it, it's who I am. Give me a theme, and I really wanna run with it. So I'm making them some activity pages, planning a scavenger hunt, some glow-in-the-dark games, and some crafts.


We were lucky to have beautiful weather for their first camping trip ever. This year, it's looking like rain, so I'm trying to come up with activities that will keep us from going crazy being cooped up in something even smaller than our apartment. All I've got so far is reading aloud and a couple of card games - Any ideas?

Posted by Jessica at 5:22 PM No comments:

The kids are well aware that we've been trying to find a house. Kee wants me to make sure that wherever we end up that her room is "as cute as a button", which seems to mean pink. Beege would like to sleep above ground. (As would I!)

The other day, I asked them if they could live anywhere, where would it be? They thought about it, and they both answered the same place. The North Pole. Kee would like to live near Santa Claus, and Beege wants to live near polar bears.

We explained that we might not see Santa Claus, even if we lived next door, because... well, magic. And that polar bears can actually be pretty dangerous, so we might not want to live all that close to them.

But the more I thought about it, the better the idea sounded. Only if we're living in Santa's magical village though - like the one in Santa Baby*. It would be a big wooden house, with a lovely fireplace going all the time. I wouldn't be overheated all the time, and there would be snowshoeing, we'd drink lots of hot chocolate, and make snowmen every day.

There would even be great job opportunities for me! I can't imagine a better job than full time toy-making. And the husband could work on the elves' tracking and computer systems. It would be great!


We told them that we'd think about it, but that it's really not the kind of place that you just move to without a real reason. And that "Santa's toy maker" is probably the kind of job that you've got to be recruited for, rather than just applying.


*Which I watch every year, 1 - because I love even the stupidest Christmas movies around, and 2 - I love Ivan Sergei. Judge all you want.

You Learn Something New Every Day.

Take the past couple of days, for example. I've learned that...

1. Brandishing a white board while making angry faces is just as effective as yelling.

2. Even though I can't talk, there is still yelling going on around here, so it's not just me.

4. If I don't yell back when they yell for me, they will eventually come find me to ask whatever it is they wanted to ask. I will never be yelling back to them again. (Unless, perhaps, one of us is in the bathroom, asking for toilet paper.)

5. I talk a lot more than I thought I did. If nothing else, maybe I'll learn some brevity.

Hopefully this won't go on much longer. The kids are already finding ways to take advantage of it. The big one's done doing whatever it was I didn't want her to do by the time I finish writing it on the white board, and the little one has "but I can't read!" to fall back on.

Although I suppose it is kind of fun to use the "bad guy" and "queen Elizabeth" voices in the text-voice program, I wish there was one that I liked a little better. I wonder if there's someone I can contact about recording an "exasperated mum" option?

You know how I've been saying for a while that I yell too much? And how much I hate it? And that I wish I could find some way to get them to stop and listen without yelling?

Well, the universe has provided me with an answer.

Last night, I noticed that my throat was a bit sore. This morning, I can't talk. 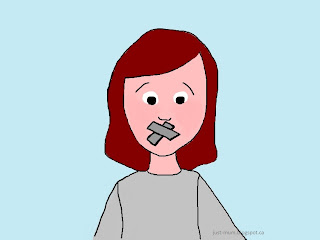 Today, I will be communicating with the kids through a system of pictograms, charades, and a text-to-voice program Husband set up on the computer before he left for work.

I'll let you know how it goes.

Of Meat and Movies.

While my kids were away, the other thing I did was watch a butt-load of stuff on Netflix. You know, things that no one wanted to watch with me, or that I didn't want to stay up late and watch but wasn't kid friendly.

I ended up watching: The Best Exotic Marigold Hotel (which was excellent if you like quiet emotional movies), Horrible Bosses (which was sort of funny, in a mildly disgusting way - think American pie. Only more Stiffler and less Jim.)*, Easy Virtue (which was just awful), and some Portlandia (which was quietly awesome). 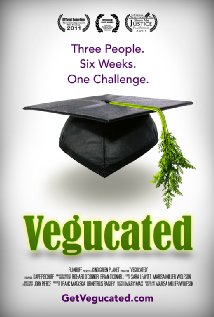 If you've been here for a while, you know that I've made some half-hearted attempts at being a vegetarian. Mostly for health reasons. And it's never really worked out. Wave a bacon cheeseburger under my nose, and I tend to forget.

After watching these documentaries, I'm giving it another shot. Not only that, I think it's going to stick this time. Along with the vague feeling that "vegetables are good for me", I've got a strong sense of outrage to back me up.

I (and I'm guessing most people) have no idea what goes on at meat producing farms. To be more accurate, I've just never really thought about it. We're so far removed from where our food actually comes from - that steak in the store has no connection to the picture of the cow on the milk - that it doesn't bother us. You think "farm", and you think green pastures and happy animals prancing around.*** I won't go into the animal treatment, because it just hurts my heart every time I think about it, but the documentaries are great - Vegucated especially - if you want to get an idea of what I mean. The environmental implications of producing meat on such a large scale are pretty frightening too.

I'm not going to be overly loud about it, but I am going to stop eating meat. I'm going to nudge my family in that direction too, because it's better for all of us in so many ways.

It's going to be a gradual process.


*I didn't realise it at the time, but Steve Wiebe is in this movie! If you haven't watched The King of Kong: Fistful of Quarters, you totally should.
**Jamie Oliver's was particularly good.
***There is such a thing as "ethically produced meat". But no matter how well the animal was treated in life, there's still the fact that it was born and raised specifically to be killed and eaten by people. I'm not sure how I feel about that.

To Clean, or Not To Clean?

Last weekend, Husband took the girls away to visit his mum, leaving me blissfully alone for almost two whole days. I had planned to do a lot of cleaning on Saturday, be able to relax all Sunday, then welcome them home to an organised and tidy home.

Instead, I set up a huge table in the middle of the room and made some shorts and a dress for Beege, and the top for the baby quilt I'm making for my imminent niece-or-nephew. (Which, if I may say, is going to be just lovely.) 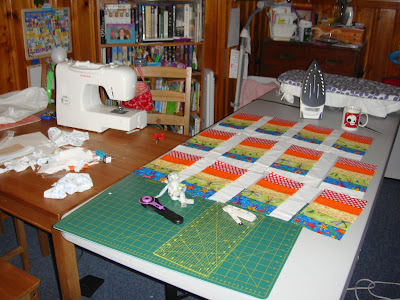 I did manage to get all the sharp/delicate/hot/pointy things put away before they got home, but just barely. I'm going to have to get him to take them away again sometime this month, because the house is still a sty.

(And I have a new quilt I want to start.)