When we last left our heroine, she was finally settling down for the night, after many (MANY) visits to the bathroom. The children had fallen asleep, each holding one of her hands, and as she extricated herself so that she could read a bit of her book before dropping off, she congratulated herself on a good day.

Later, as she put her book away, she heard the sound of gentle rain on the roof of the tent and smiled. Ahh... nothing like a gentle rain to lull one to sleep. She closed her eyes.

The wind picked up. The rain started to sound like pebbles beating against the tent. Her eyes flew open at the first clap of thunder. She crossed her fingers and lay in the dark staring at the ceiling of the tent, and hoping against hope that... drip.

The storm howled outside, and she felt blindly around her in the dark to see where that damn drip was coming from. She found the source, just to the left of a peacefully sleeping Beege. Improvising in the dark, she threw down a plastic bag and covered it with a towel, hoping it would both dampen the sound, and sop up the water.

This one sounded like it was coming from the other side of the tent. She groped blindly around again until she stuck her hand into a large puddle forming on Kee's sleeping bag. She pulled her groggy child up to share the twin air mattress that she had been hoping to have all to herself. Fine. It will be fine.

This one was coming from right above her. She pulled Kee in closer to get her out of the way of this new watery intruder.

As she felt the water drip steadily onto her forehead, she felt tears prickling her eyes. Feeling defeated, she woke the girls and explained that they needed to move. She put their coats on them, making sure to cover the blankies clutched in their arms, unzipped the tent, and pushed them out into the night.

"Run, girls, run!" she exclaimed, grabbing their hands and urging them through the pelting water.

They blinked in the dimly lit kitchen, and let their mother lead them, still groggy to the couch. After settling them both in and covering them with their blankets, she scrunched up a stuffed dog to use as a pillow and laid down on the floor. Thank heaven for backyard camping.

Camping. Night One. Part One.

As you know, we were "camping" in my parents' backyard. Totally hard core, that, I know. But we did have to walk around the house and tromp through the kitchen and living room to get to the bathroom. So, in an effort to keep from having to run back and forth from the house all night (even though they both sleep through the night at home), I didn't give them much to drink in the evening and left getting ready for bed 'til the last possible moment.

After all the tooth brushing, toilet using, and grandma hugging, we finally settled into our tent at about 9:45*.

I suppose this was kind of inevitable. 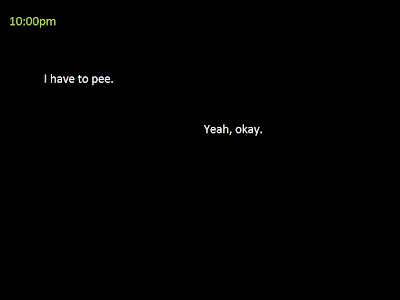 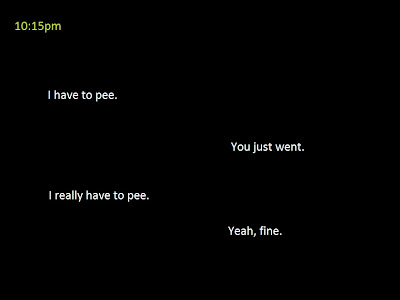 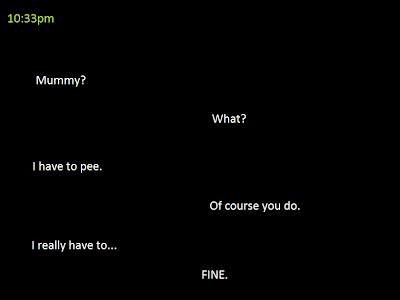 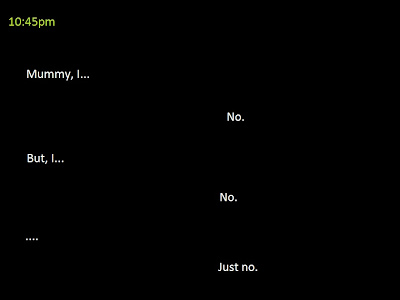 Luckily, after the fourth time dragging myself through the house with one or both children, they finally settled in for the night.

But, gentle reader, that is not the end of the story.