That Was Rude, Martha.

There has been a lot of crap floating around getting people's dander up on the internet this week.

Let's start with The Martha Stewart thing. She doesn't respect bloggers. She thinks that we are untrained, and shouldn't be talking about things we don't know. We publish "untested recipes". We are not experts.

Well, I suppose, in a lot of cases, she's right.  When I post a recipe, I've only tested it in my kitchen, thought it was tasty and that my friends might like to try it. When I post about a craft, I'm showing you how I did it, and that is all. When I tell you about my kids, I'm mostly venting. I am certainly not trained to tell you about anything. I also never claimed to be. (And just so you know, Martha, the editor at Vogue was not trained as an editor.)

I'm actually not offended so much by Martha slagging bloggers as I am surprised. One would think that you'd recognise that there are an awful lot of us, and your business sense would stop you from potentially alienating a huge market base. Or at least that you'd exercise better manners. That was rude, Martha.

Our lack of expertise doesn't make our voices invalid. Just as your lack of training didn't stop you from becoming the head of a multimillion dollar multimedia empire.

Then there's the Matt Walsh Stay at Home Mom Thing. I am a stay at home mum. It is sometimes a thankless job and, I do think, a very important one. Mums who work, in the traditional sense of an outside paycheque, are also doing an important job. When you have a family, you make all kinds of sacrifices in all sorts of ways. We all love our kids. Can we leave it at that? I am wonderful, you are wonderful, she is wonderful too. It's not a competition. Let's move on. 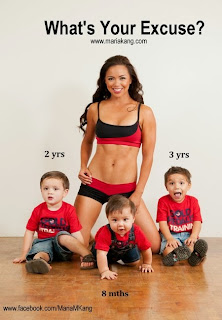 And of course, the "Hot Mom" Thing.  Maria Kang is a fitness enthusiast. She says that she posted this photo to be inspirational, and I'm going to give her the benefit of the doubt and believe her.

There are detractors who think this is fat shaming, and there are the "you go girl!" supporters. This woman works out 5-6 days a week, and she's proud of the body that her hard work has attained her. That's great. Good for her! Just like if I work really hard on a quilt and post a picture of it. No, really. Why is it different? (Except for the fact that no one is going to feel goaded by a quilt, of course.)

If she wanted her inspirational message to be clearer, maybe she should have said "I did it, and you can too!" or something along those lines. It would have worked out better for her. "What's Your Excuse?" is a bit inflammatory. Physical beauty is an area where most women are sensitive. When you post something on the internet that seems to imply that the only reason any of us are walking around overweight or frumpy is because we're not trying hard enough, that's going to get a reaction. I think that it probably just didn't even occur to her.