The other day, Husband took the girls grocery shopping with him.

As with any other time he goes shopping, on his way out the door, I reminded him that if he saw any socks for Kee, he should buy them. Two sets. Because there are only three pairs in the house that she'll wear. I've tried many different kinds, sizes, and colours, but she will only wear size 9 ladies' Hello Kitty ankle socks. 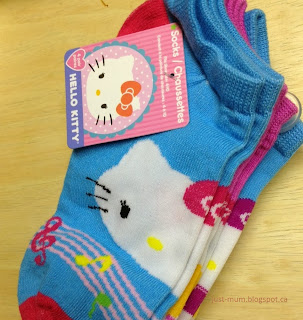 So. As they passed the lingerie department, Kee broke away and ran towards a rack yelling "BOOBY COVERS!" She then pulled down a bra, held it in front of her and started dancing, exclaiming "LOOK, DADDY! I'm a HULA GIRL!"

Then he died of embarrassment.

But he did find the socks, so totally worth it.

*No husbands were harmed in the production of this post.
Posted by Jessica at 9:55 AM 4 comments:

All I Want For Christmas...

So. The kids are off school, starting on Friday, for two weeks.

*sigh* I love my kids, I really, really do. Ask anyone. But TWO WEEKS is a long time to be stuck in our apartment with them. Because I know that we won't go to the library every other day like I think we will. And I know that playing in the snow will last about 10 minutes before someone gets a handful in the face and starts crying. And I know that by week two, we will be watching Barbie's Magic Christmas (or something. Is that a thing? I don't even know anymore.) for the third time because we've already watched the only other two movies that everyone can agree on twice already.

Every year I ask for the same thing for Christmas: peace and quiet. I have a 5 year old and an 8 year old, so we all know that's one present I won't get for at least another 13 years.

But this year, I got an early Christmas present that means I can at least sit off to the side while they watch their high pitched cartoons, and watch something I might actually enjoy on my iPad. Like The Walking Dead, maybe.


You probably didn't know this about me, because it's a very unimportant fact, but I hate ear buds. Really hate them. I actually stopped listening to my iPod because I hate them so much. They're awkward, they fall out, and they make my ear holes (there's probably a technical name for that, right?) sore. So I am pleased to report that my new headphones are really comfortable to wear. They even fold up and have a carrying case, so the old iPod may make a reappearance.

I didn't get the noise cancelling ones**, so I can still hear the kids well enough to assess whether I need to pay attention to whatever it is they're yelling about, but they can't hear the zombie groans or shooting.

*While the "Beats by Dr. Dre" headphones were provided to me by Staples Canada, the dislike of high pitched cartoons is entirely my own.
**But I may spring for them later. ;)
Posted by Jessica at 1:27 PM 6 comments:

Lessons From My Daughter.

Lately, I've been thinking a lot about Beege. She is such a brilliant kid. She's funny, and insightful, and unique. She's eight now*, and it's time to start preparing her for the wonders/horrors of puberty. I've worried about her fitting in, because I've never felt like I fit in anywhere. It's a lonely feeling, and like every other bad thing, I want to spare her that.

But really, she's fine. She's more resilient than I ever was. She stands up to bullies, and if she thinks something's important, she makes sure that you listen. She's sure of who she is and what she likes, and I've realised that she is going to find people to fit her, she's not going to worry about fitting herself to anyone else.

Beege and Kee like to watch TVOkids. And every time they bring up the phone number, Beege wants to call in. She always knows the answer, or has something interesting to say about the topic, and she wants to share. I used to let her. But she never got through. And at some point, I started telling her not to bother because she wouldn't get through anyway.

If I could use a time machine, I would use it to go back to the first time I said that and punch myself in the mouth before I could get the words out.

Last night when she asked if she could call, I was in the middle of making dinner. I started to say no, as usual, but instead "Go ahead," I said, and couldn't help adding, "but you probably won't get through."

She called the number and sat there patiently, holding the phone to her ear and looking very serious. I told her to hang up after a few minutes, but she told me it was ringing, and she would wait. Then someone finally answered. She got on the air. She told the hosts about Claude Monet, and that she liked his paintings of Water Lilies. She told them that she also likes to draw and paint.

And she was so happy. I wish I'd taken a picture of her face the moment she got off the phone.

I admire her so much, and I want to help her become whoever and whatever she wants. And that means letting her feel disappointment. Letting her try things that might not work out. Letting her discover her own limits, and not forcing mine on her. Especially when mine are crap.

*Her birthday was on Friday. I'm still in shock.
Posted by Jessica at 3:11 PM 6 comments: