There are some things that I'm just not willing to buy my children. There are any number of reasons, be they spatial, financial, or sometimes, just the fact that it creeps me right the frick out.

Beege did  a collage project in school, at the end of November. When she came home, she carried a tiny scrap of paper with her. On this paper, was a picture of a "Furby Boom", cut from a flyer someone had brought in. She kept that piece of paper with her all the time, and showed anyone she could. "Isn't it cute? They talk!" she'd say.

Beege is a very smart girl. She knew that with both her birthday AND Christmas coming, if she mentioned this Furby thing to enough people, chances were pretty good that she would get one.

She had no way of knowing that I hate Furbies. I've hated them since before she was born.

Can you honestly tell me that thing isn't creepy? They remind me of Mogwai. And we all know how that turned out.

Her birthday came and went. No Furby fell into her eager hands. Christmas too. Still no Furby. I was seriously hoping she'd just forget about it. Because, as we all know, kids often do. But not Beege. She fell asleep some nights with that scrap of paper clutched in her hand.

Beege was breaking my heart, but I still couldn't bring myself to bite the bullet and buy one. Not only are they obviously harbouring evil, but those things are incredibly expensive, and this new generation requires the use of a smart phone or tablet to "look after" them.

Then, one day,  Beege counted up her Christmas and birthday money and realised she had enough money to buy one herself. Husband said he'd put the app on his phone. And no one believed me about the whole "evil" thing. I was out of excuses.

Beege brought Loo-Koh home one snowy afternoon, after a shopping trip with Daddy. "She was the very last one!" She pulled it out of the box excitedly, and exclaimed over it's furry softness. When they got batteries put in, she was a sweet little thing. Eyes full of hearts, humming softly to herself. I will admit, it was kind of adorable. The girls played with her, played music for her, and took turns petting her. They sang her lull-a-byes, and tucked her in when they put her "to sleep". (Furbies don't have off buttons, you know.)

As she learned English, she would chirp things like "Loo-Koh Likey!" "U-Nay* Favourite!"

Then, one day when Beege woke her up from a nap, Loo-Koh had changed.

Her large, round eyes were full of flames, and when she spoke, it was in a deep, guttural voice. "LOO-KOH NO LIKEY!" she yelled. Then, she laughed. She proceeded to burp, fart, and yell at my daughter.

Needless to say, Beege was upset. "What's wrong with her?" she sobbed. "Will she change back?" She tried singing to her, petting her, cuddling her, and asking plaintively "What's wroooooong, Loo-Koh?!" Nothing helped. The furry little bastard continued to be abusive and rude.

We scoured the internet looking for clues as to what had gone wrong.

What we found were scores of stories about devastated children whose fuzzy little friends had suddenly turned nasty.  Angry parents were leaving messages in forums, helplessly wondering what the hell they could do to fix this problem.

Finally, blessedly, we found this: The hard re-set.

- Turn it upside down
- Push in its tongue
- While holding in this position, pull its tail
- Maintain that pose for at least 10 seconds.

And Thankfully, it worked. Loo-Koh closed her eyes mid angry scream, and when she opened them again, they were once more filled with hearts. She sang a little song in her sweet chirpy voice.

It stayed that way for about a day. 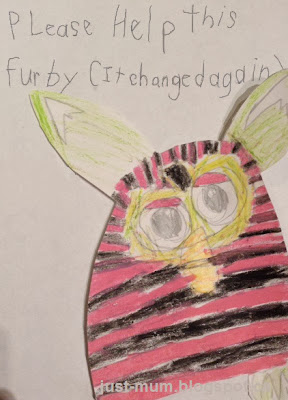 Sadly, it seems that no matter how much attention she lavishes on this thing, it will not be satisfied. And every time we have to re-set it, it goes back to factory settings, so any progress it's made with English words or personality (including the nice one) are lost.

Told you it was evil.

*Which means "you", according to this Furbish Dictionary.
**Seriously, Hasbro, how high was the team that came up with this stupid thing?
Posted by Jessica at 1:12 PM 16 comments:

The Way To Her Heart is Through Her Feet.

Over the holidays, Husband generally takes the kids to visit his mum while I stay behind to deal with all the post holiday cleanup. I'm totally okay with that because it means that I get to sleep in, leave work out on the table without worrying about it for a couple of days and watch movies that I wouldn't normally get to.

This year, what with the ice storm, then the clean up, then his mum not feeling well, then my grandmother's surgery... the visit got put off almost a month. By that point, I can honestly say that Christmas had been dealt with a while ago, and I really had no reason not to go.

There are two things that I know for sure my mother-in-law likes about me. My banana bread, and the socks I make her. Banana bread is easy enough, because it really only takes about an hour of my time. The socks are a little bit trickier.

And with all the other stuff going on, I forgot to start them. Whoops. But I was determined. Bad enough we'd missed Christmas, there was no way I was showing up without socks.

First, the yarn. It appears that they've stopped making the yarn I liked to use. No problem! I found a perfectly lovely hat and scarf in the hallway that no one had ever worn, that happened to be the right weight. Voila! Sock yarn.

I left starting far too late. It didn't help that I haven't made them in a few years and reached the toe to find I'd forgotten a few decreases along the way and had to rip it back all the way to the heel on Thursday night. I have never knitted so fast in my life, and still, I only had one sock done when we left on Friday.

I spent every spare moment while we were at her house knitting, and finally finished early Sunday morning while watching cartoons with Kee.

It was awesome. I was a machine. It was truly a herculean knitting effort. I even sustained injuries. I can now totally claim "hard-core-knitter" status.

That's definitely a thing.
Posted by Jessica at 11:54 AM 6 comments:

Labels: family, knitting, reduce reuse recycle, socks, stuff I make, too much to do, Whoops, yay me

Remember the other day, when Kee asked for a pair of mittens? Well, I decided to go ahead and make her some. The ones I made her last year* were getting too short, and though that inch of wrist peeking out didn't seem to bother her at all, it was driving me insane.

Unfortunately, I didn't have any pink yarn anywhere. (And yes, I am too wimpy to walk out to the craft store when it's 30 below, even if it is mostly windchill.) Luckily, the scarf I made to go with the mittens I made her last year has barely been worn (turns out she hates scarves), so I went ahead and reclaimed it. 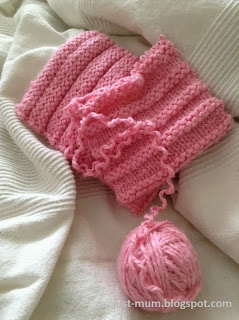 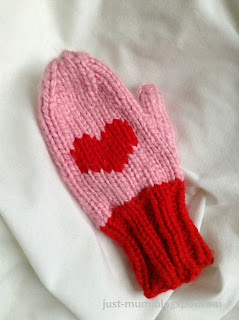 Then she went ahead and lost one the first day she wore them.


*When she declared she absolutely would not wear any mittens unless I was the one who made them.

This past Sunday, I got a day off. It was supposed to be an afternoon, but I ended up being out of the house from 9:00am to almost 9:00pm. Which is pretty much unheard of. Special circumstances though, as I spent the morning with my mum visiting my grandma in the hospital (Grandma's doing well; coming home today, in fact), and spent the evening trying not to spew.

I spent the afternoon sitting around with friends, knitting and eating yummy things. Which, unfortunately, did bad things to my innards (yummy things tend to be teeming with fat, sugar, and occasionally alcohol... so...). Anyway. I got trapped at my friend's place, since I am not in the habit of befouling taxi cabs or hurling on the TTC.

In the middle there, between the hospital and the angry gut, I had a really lovely day.

What this is really about is the fact that the rest of my family spent the day doing things. Without me. Actual things, not just re-watching every episode of Avatar.

They went grocery shopping! They got to pick out what they liked, and still ended up with fruit and vegetables!

They went to the Library! Husband got Kee her very first library card. For some reason, she hasn't been willing to admit that she can read, even though I've 'caught' her several times. Now that she can take out her own books, I think she's ready to admit to us that yes, actually, she can read.

They played a video game together (apparently without fighting), they helped make supper, and they even had baths and got to bed on time. When I finally made it home, there was a bouquet of my favourite daisies waiting for me.

The long and short of it is, they are entirely capable of managing quite well without me, and I need to get out more. So who's up for coffee? Anyone?