Put A Bird On It.

The other day when we were walking home from school, Kee fell behind for a minute. When she ran to catch up, she was holding her hands in front of her, cupped around something.


She carried it home carefully, making sure that she was holding it gently and guarding it from the wind. When we got it home, she ran to her room right away to make a nest for it. She proudly showed me the little box filled with washcloths and surrounded with rocks. "So that it's like the outside."

She filled a bucket with warm soapy water and very gingerly cleaned the dirty thing. Then she spent the rest of the afternoon making sure that it was comfortable, feeding it, and trying to give it flying lessons which consisted of her throwing the thing in the air and yelling "Good job!" a lot.

The next day when she left for school, she left me with strict instructions about what I was supposed to do to care for the bird while she was gone. I put the stupid thing in it's "nest" and ignored it for the rest of the day.

Allow me to introduce you to the newest member of my family, Kee. (Yes, she named it after herself.) 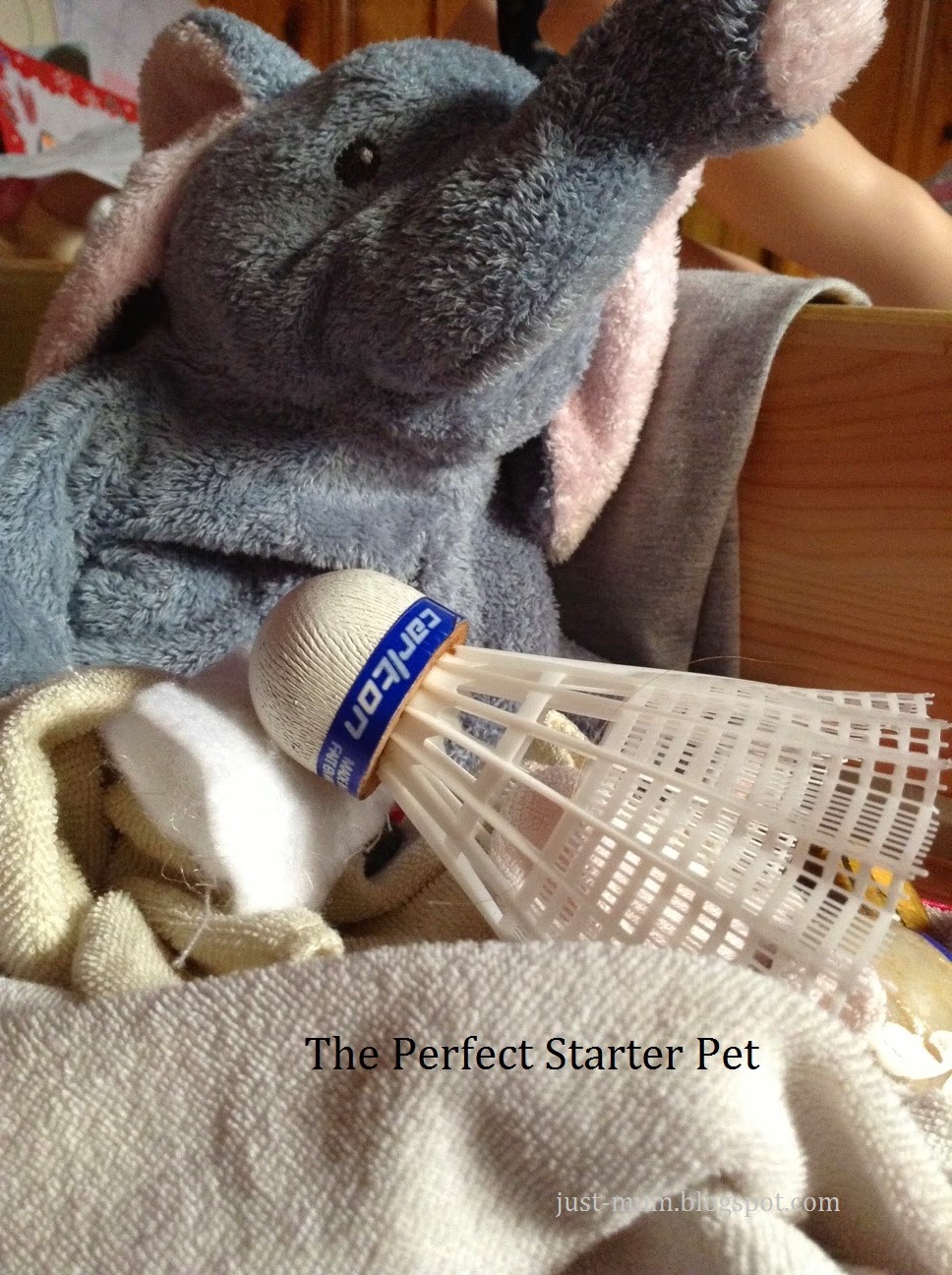 You didn't think I let her keep an actual bird she found at the side of the road, did you?

This afternoon, I was sitting reading a book when Kee bounded up and demanded a snuggle. Not in a minute, not when I finished my page, RIGHT NOW!

Me: [Grabbing her for her snuggle] Why do you need to snuggle right now?
Kee: Because I love you!
Me: You won't love me in 30 seconds when I'm done reading my page?
Kee: Of course I will! I'll love you forever and ever!
Me: Even when you're a big grown up lady like me?
Kee: Of course!
Me: Even when you have your own little kids?
Kee: [Very serious] I think I might not have any babies.
Me: Oh... no?
Kee: Nope. And it's only my decision if I want to have babies or not.
Me: Absolutely.
Kee: You decided to have me, didn't you?
Me: I sure did.
Kee: I think that was a very good decision.
Me: I think you're right.


Then we had a tickle fight. 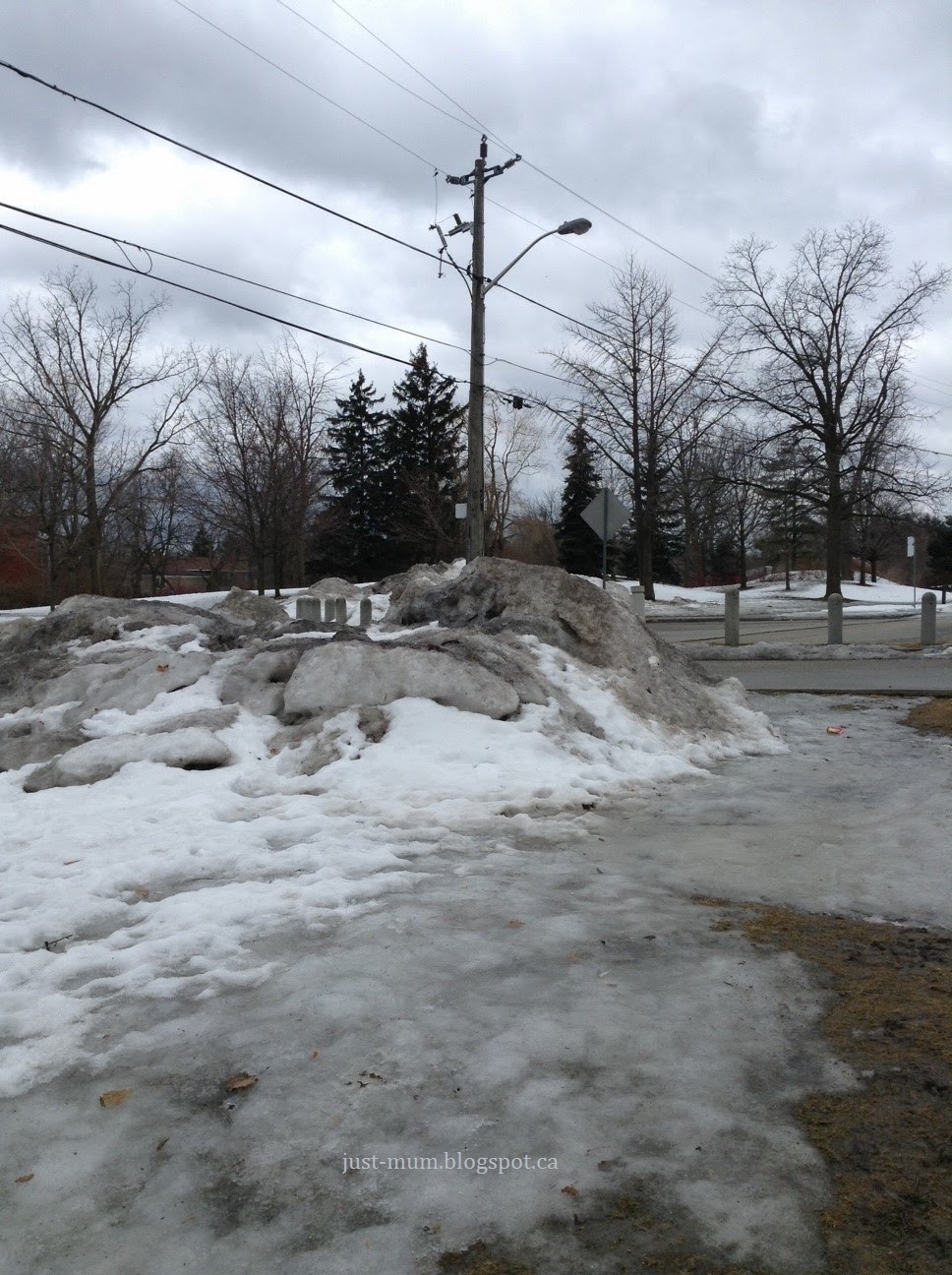 I must respectfully disagree.

Did anyone else find March Break harder than usual this year? I'm a giant wimp, because the kids weren't even here for four days*.

I think it has a lot to do with this crap weather. What the heck, March? Don't you know it's Spring this week?! It could also have been partly because I spent most of the week blowing my nose, sneezing, and trying not to fall asleep.

By the end of the week, or at least the five days that I was trapped in the house alone with them, the general angst level around here was pretty high. I couldn't leave them alone for five minutes without coming back to screaming, stomping, slapping, or just sitting on the floor wailing. It wasn't good.

I've been trying to limit screen time a little around here, but by Sunday, a full on movie day was in order. You sit here, you sit over there, here's your popcorn, be quiet. Of course, before we even get to that point, picking a movie can be a half an hour ordeal.

Seriously, they end up fighting over the movie so often that I've actually had to institute a rule; they each take turns suggesting a movie until they come to one they both agree on, and if they run out of movies, then no movie. I was in no mood for that though. Movie day was going to save my sanity.

Lucky for me, I'd gotten some recommendations in my monthly Stream Team news letter. 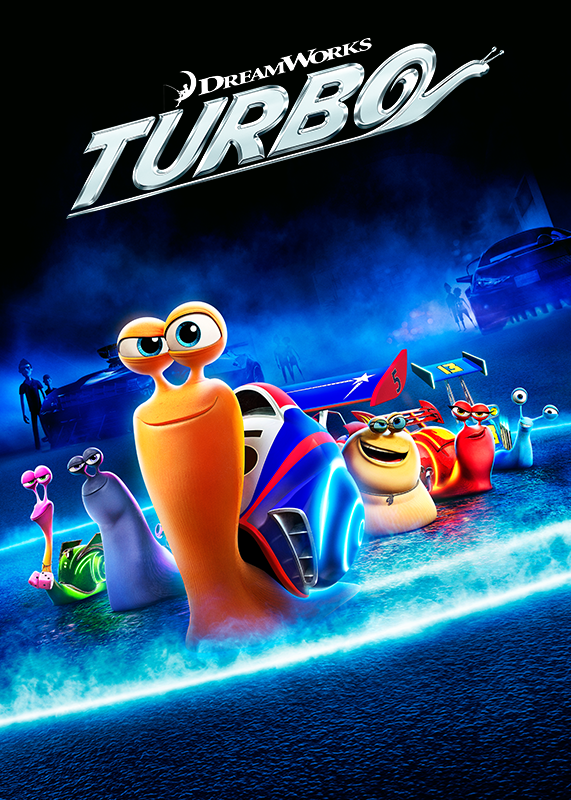 I have to admit, I'd never even heard of this one. Which is a little surprising, since it has such a star studded cast (including Ryan Reynolds, Samuel L. Jackson, Paul Giamatti, and Maya Rudolph). It's the story of a garden snail who dreams of going to the Indy 500. And while I don't like car racing, or snails, I did like the movie. It was sweet, and had nice messages about the importance of family and hanging onto your dreams. Both of my girls enjoyed it, and it's definitely one you can watch (and actually enjoy) with them.** 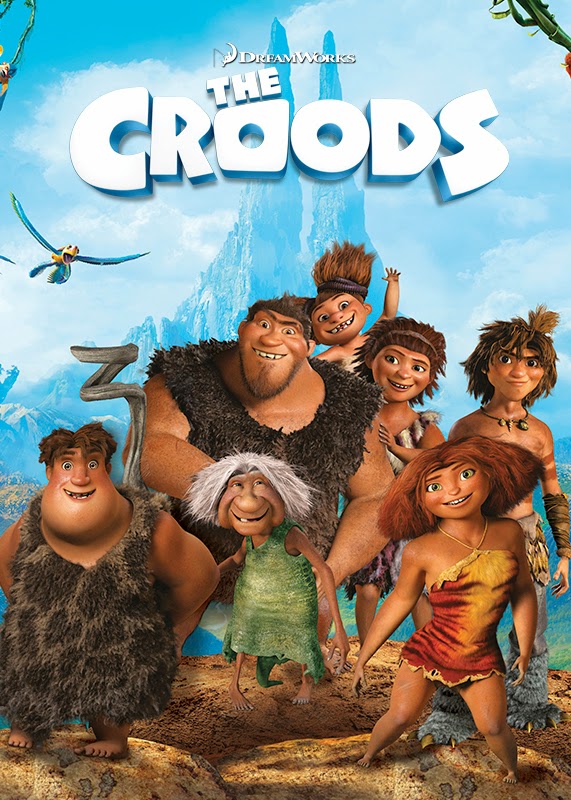 For movie number two, we went with The Croods (Emma Stone, Ryan Reynolds, Nicolas Cage, Cloris Leachman, Katherine Keener). For a movie about a family of cave people who need to relocate, it actually had some quite poignant moments. It illustrated the importance of accepting and embracing change, as well as the way we sometimes don't appreciate things as we should until they're gone.

It also didn't hurt that for the rest of the day my kids had a rich array of pretend play fodder. One moment they're snails, the next they're prehistoric people with sloths for belts. We also drew pictures of our favourite parts and characters. I love how two movies can equal an entire day of entertainment.

AND I got to spend the afternoon listening to Ryan Reynolds, who I've had a crush on since The Odyssey. Win-win, I say.


*Thank you to my mum, and then my husband, for taking the children away and giving me a chance to dig all the crap out from under their beds.
**SPOILER: They were a little offended that the Canadian guy turned out to be such a jerk.

_____
Disclosure: I am part of the Netflix #StreamTeam and have recieved perks as such. All opinions are my own.

An Evening With Oscar, Among Other Things.

Last week was a busy week for Beege, she had a speech to give, an audition to go to, and on top of all the regular school stuff, she was sick. She wasn't SICK though, if you know what I mean. She's dragging a bit, and she's got a hacking cough, but there's no fever or vomiting, and she swears she actually feels fine. Since her speech was on Friday, and her audition on Saturday, I kept her home Thursday. I sort of figured if she got a day of down time, she'd be okay for the other stuff.

She gave her speech on Friday and, while she was a little tired, she swore up and down that she felt fine. She went to her audition and had a lot of fun, although she was a little disappointed that they only got to pluck the violin, and not try out the bow. She still felt fine.

Then, on Monday, I got a call at lunchtime telling me to come and pick her up because "she isn't feeling well." When I got there, she told me that she actually felt fine, but was coughing a lot in choir, so they told her she should go home.

On Tuesday, Kee said she felt sick. And it really felt like she was just saying it to cash in on the attention that her sister was getting from everyone. I told her, fine she could stay home, but there would be no screens and she would spend the day laying down. I left Kee in bed, and took Beege into the school and talked to her teacher, telling her that although she does have a cough, she hasn't got any other symptoms so please don't send her home in the middle of the day again.

Kee slept for the whole morning, and then threw up in her soup at lunch, which of course made me feel bad that I didn't believe her. Then she finished off (a different bowl of) the soup, and spent the afternoon playing and doing puzzles and looking entirely healthy.

On Wednesday, I made them both go to school. I finally got to catch up on some of the laundry and make a dent in the giant pile of dishes that always accumulates when I'm not around.

Oh... did I not mention? Yeah, I wasn't around on the weekend. 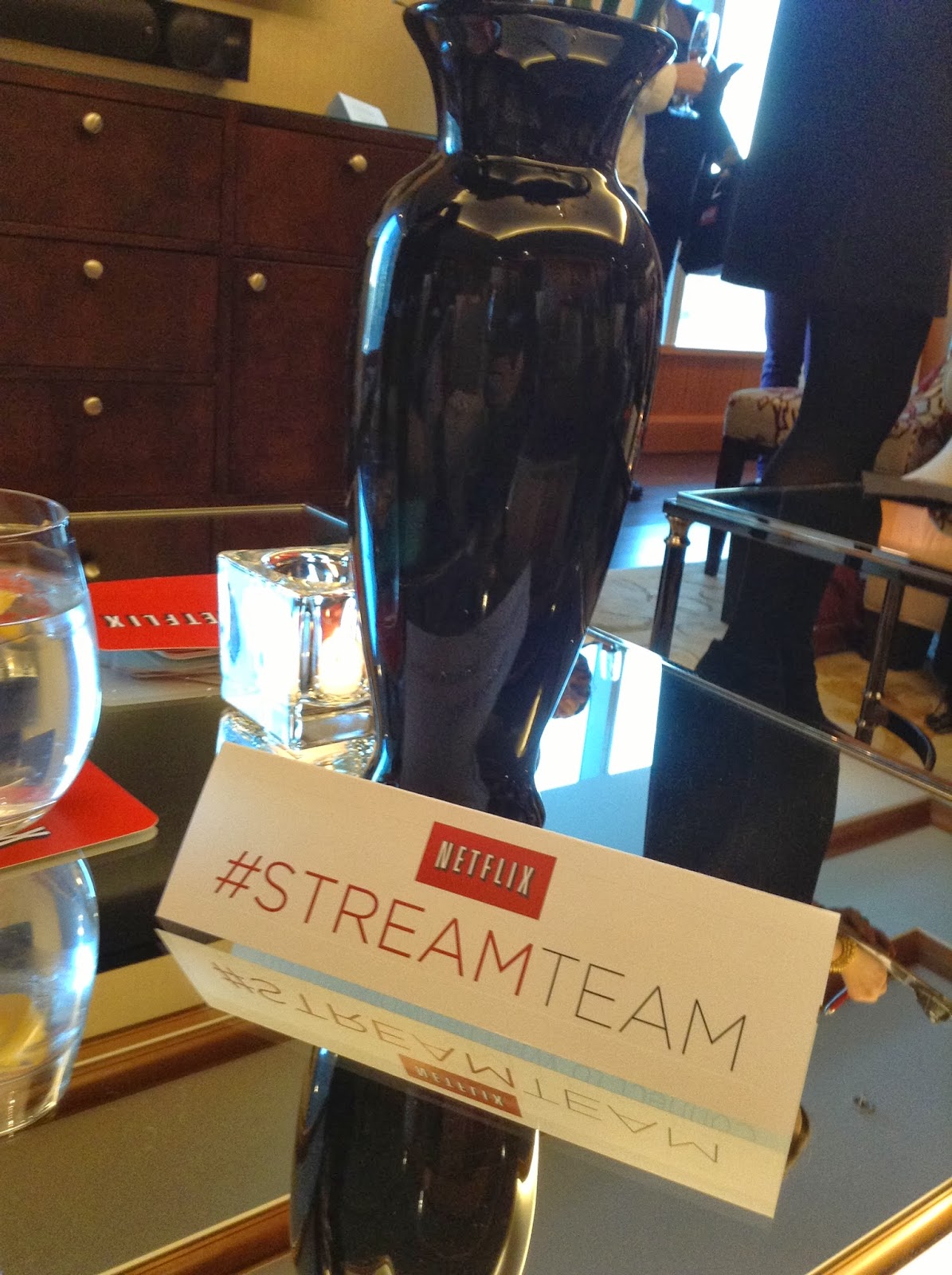 I don't usually watch the Oscars. I used to. I haven't been to that many movies that aren't cartoons in the past few years though. It really loses its luster when you haven't seen any of the movies, and to be honest, don't even know who most of the people are.

But this year, I attended a swanky Oscar party. That's right. I changed out of my yoga pants*, brushed my hair, and made my way to the Ritz downtown to drink champagne and watch the show.

How did I get invited to such a thing? Well, lucky for me, I'm part of a group of bloggers that have been invited to be part of the Netflix Stream Team.

You know how I am about parties, but it was actually really fun. I met some great new people, I got my hair and makeup done, I got some fabulous ideas for shows that I should watch on Netflix, and I ate popcorn coated greenbeans**.

SO. If you have any burning questions you'd like answered about Netflix, I'm your girl. Or at least, I'm a girl who knows someone who can probably get you an answer.

(If you're curious about some of the other members of the Stream Team, I've got a list of them on Twitter.)

*Thanks again to my sister who braved the mall with me on Saturday to find something decent to wear.
**It was weird but good.
Posted by Jessica at 3:04 PM 10 comments: