A couple of years ago, Beege started the "Cleaning Up The Earth Crew" at school. It consists of her, and all the friends she can talk into it. They get rubber gloves from the lunch supervisors, and they spend their lunch hour walking around the school yard, picking up all the garbage that's blowing around.

She decided very early on that it was her responsibility to keep the Earth clean. Even before she started school, we'd always take a couple of bags with us when we went on a walk or to the park so that we could pick up any garbage or recycling we saw along our way, and put it where it belonged. 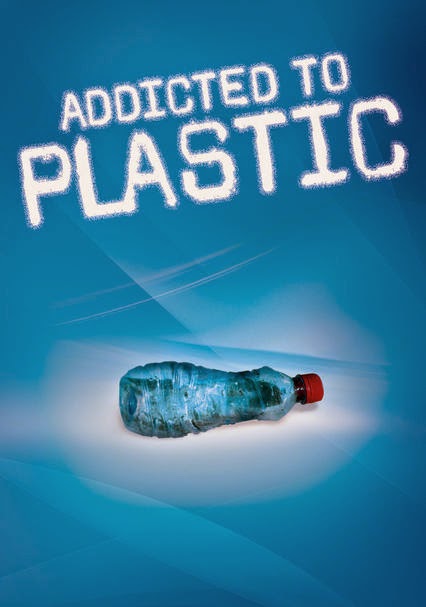 She has always understood that it's up to us (all of us) to do our part to keep the planet healthy so that we have somewhere to live. She knows, essentially, about turning off lights, and using less water. She mostly knows why she should use a re-usable container and water bottle. It's hard to imagine though, the global and long term effects of some of our choices.

Beege is very interested in learning more about the environment and how we can help; that's where Netflix comes in.

I like to binge watch my favourite shows as much as the next person, but it's great to know that you can also find excellent documentaries to watch. The first one Beege wants to check out together is Addicted to Plastic, a documentary focusing on the worldwide production and environmental effects of plastic. The host takes a 2-year trip around the world to give us a better understanding of the life cycle of plastic.

There are a host of documentaries to choose from, whether you're interested in learning about where the bees have gone or where we get our food. Some of them are a little heavy though, so if you're going to be watching with kids, I'd recommend watching yourself first so you're ready for any questions that might arise.

(And if you decide that serious documentaries aren't the way to start out, they also have any number of educational childrens' shows to start out with.)


...Speaking of Netflix, have you entered the draw yet?

No One Told Me There Were Prizes.

While the Olympics were on, the kids were very interested, especially in the hockey. I've never been a hockey fan, but I ended up watching too. More hockey than I've ever watched in my life. I even got into it a little bit; it's hard not to when the teams you're rooting for are kicking ass all over the place.

So anyway. I have this friend down in Chicago (who is a hockey fan) who swore up and down that the US would win. We even made a friendly wager on the semi-final men's Canada vs. US game. The winner would get something representative of the loser's country.

I had already decided that I'd probably send her a toque and a painting of a moose, if it came to it. Maybe some syrup. However, painting a moose became unnecessary when Canada beat them and went on to scoop up the gold.*

Marianne was very mysterious about what she'd be sending me, so all I could do was wait. 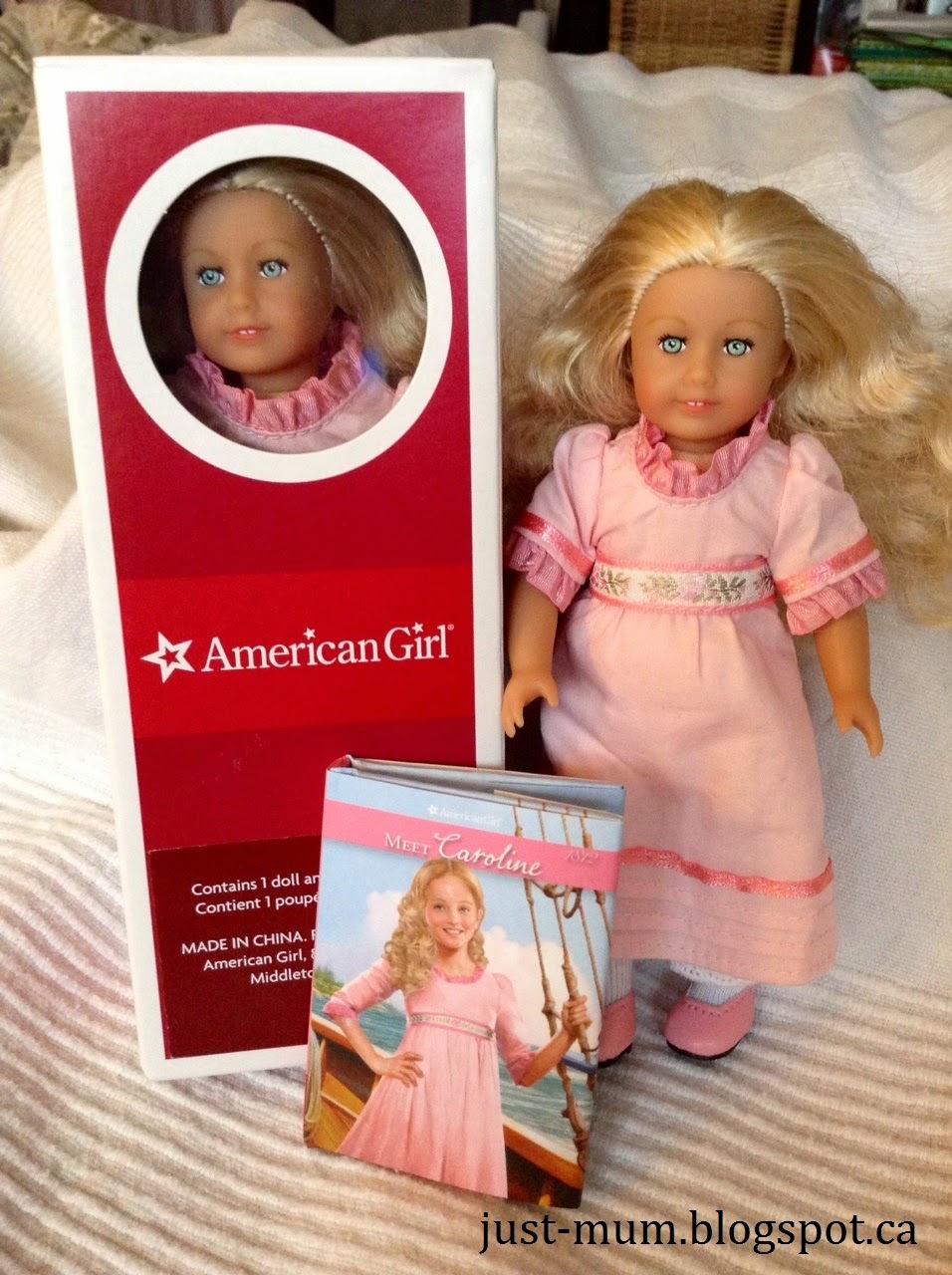 Imagine my childrens' delight when they opened up the package and found these lovely little dolls, one for each of them!

Beege loves that her doll came with a little book. She smoothed her hair, sat her in a corner, and propped the open book in her lap. She does not play with her doll, she just looks at her admiringly.

Kee, on the other hand, plays with her doll all the time. She calls her "Marianne", saying that the book is not about her, it is by her. Her Marianne can fly and has super strength, as well as a sidekick named Lily. And she writes books. Her doll no longer has smooth hair, and there is something gross stuck to her dress (possibly an old cheerio?), but she is much loved and has many adventures.

Now. My girls are very polite, and they (almost) immediately sat down to write thank you letters. They're good like that. I could have sworn I mailed them. Really.

I found the envelope this morning, on top of my dresser. Along with a cheque I thought I'd put in the bank. I obviously had a whole day happen entirely in my head. Now that I'm thinking about it, I'm a little worried about what else I might not have done...

Anyway. It's in the mail, Marianne.


Oh - btw, have you entered my Netflix giveaway yet? (Open to Canadians.)

When Kee was a toddler, she used to crawl into my bed in the morning and snuggle in with me while she fell back to sleep. Generally for an hour or two.

At some point, I decided that she was not going to starve if I didn't hop out of bed at 6 every morning to get her her cereal. She is perfectly capable of getting herself a snack out of the cupboard, or something out of the fridge. So I told her that Mummy will get up when the alarm clock goes.

That worked well for a little while. We were back in snuggle and fall asleep territory. It was nice there. 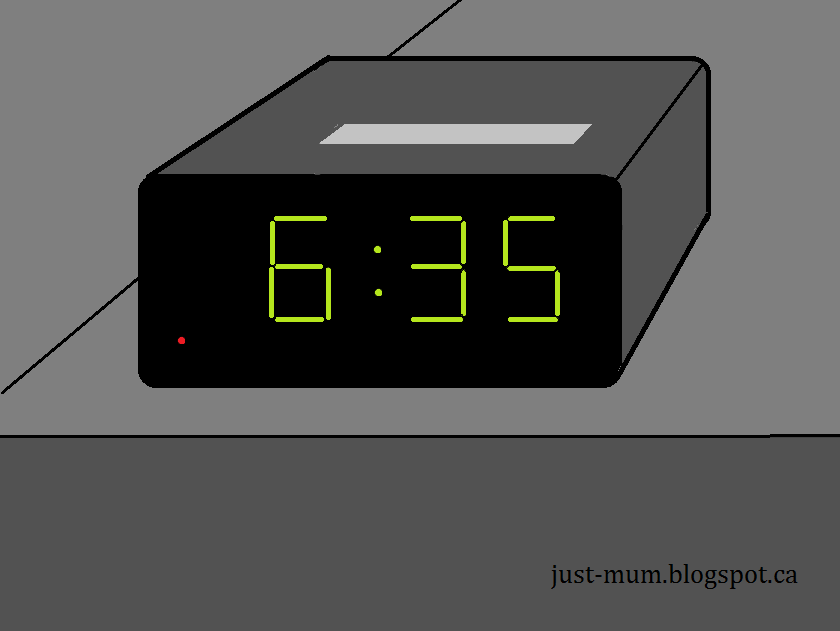 Now that she's learned to tell time, things are different yet again. She knows that the alarm goes off at 7:30. She will come in, shove me over so she can get in and dutifully report "Mummy, it's 6:32*", then snuggle in. Five minutes later, she sits up, looks at the clock, pokes me and says "Mummy, it's 6:37." Every five minutes, until the alarm goes off. So while I'm not actually asleep, I'm not actually awake either.

Just this morning, she added another little twist. She has become really interested in numbers. She started adding and subtracting, and was fascinated when I started telling her about grouping (multiplication and division), and she's fallen in love with fractions. So any time she sees numbers, she sets about dissecting and reorganising them.

It's really hard to sleep through.

I'm starting to think that it would be better to just get up at 6:35* and get the kid her breakfast.

Or train her to ask Daddy.


Oh, hey! Have you entered my Netflix prize pack draw yet?


As you know, I'm an avid Netflix watcher. I love hopping on there and finding an interesting little gem that I've never heard of, or catching up on all the movies I just didn't get around to seeing. And of course, there's all the original content that you can't find anywhere else.


One show in particular that the kids and I have been enjoying is Turbo FAST, which started airing new episodes on April 4th.

And now, if you weren't already, here's your chance to enjoy them too!

Enter below for your chance to win 6 months of free streaming from Netflix, as well as some swag and snacks. (Don't worry, it's still applicable if you're already a subscriber!) The winner will be selected by random draw and contacted by email. The winner will have 48 hours to respond before a new winner is drawn. This contest is only open to Canadians.

I'm Not Good With Change.

Anyone who knows me could tell you that. I am comfortable with the familiar. Conversely, I also get antsy when things are the same day after day after day. I know. I'm a complicated creature.

Anyway. After years of looking, we've finally found, offered on, and purchased, a house. That we're going to move to. In a whole different town. I won't be able to walk to the library with my eyes closed*. I can't tell you, down to the minute, how long it will take me to run out and get milk. I won't know which streets to avoid when I go for a walk because they get overly muddy when it rains.

But. I will have room to spread out a bit. My kids will have their first little bit of privacy. Husband will have somewhere to noodle around on his guitar that won't drive me insane. He'll finally be able to put up his Star Wars movie posters. We'll all fit in the kitchen at the same time. It's going to be good.

But. We'll be moving to my parents and sister. They'll have new opportunities and make new friends. Our "adventure walks" will, at first, be an actual adventure.

And this is the loop that started running in my head around 2am as I lay with my eyes squeezed shut, desperately willing myself to just go the hell to sleep. For every positive, up popped a negative.

Anyway. In an effort to try and curb the anxiety and focus on something that actually needs doing, instead of all this needless worrying, I thought I'd get started packing. But even that seems overwhelming. We're not actually moving until June, so we can only pack things that we probably won't need until then. And if we won't need it for a few months, then do we really need it? Now I have to start culling and sorting. This is obviously not working.

I need something easier. I'm going to get started picking paint colours. Should be a total breeze, right?

Labels: all about me, House, I can't sleep, I'm neurotic, I've got too much crap, Mummy ramblings, organisationally challenged, too much to do

The Fine Art of Distraction.

My husband and I went to six different places between us to try and get our hands on a copy of a Frozen DVD. Sold out. Everywhere. Some places more than once! What the heck? And of course, I had promised my kids that we would watch Frozen on Friday as a reward for getting ready for school on time for the whole week.

I am not above minor bribery.

But then... sold out. I am about to break a promise. Through no fault of my own, and I'm sure that they (Beege at least) will understand... but still.

Lucky for me, I have an ace up my sleeve that might keep me out of the doghouse.

Another movie that they really loved (and have seen six times now) was Turbo. While I might not want to watch the movie for a seventh time, I am willing to watch the cartoon based on it, and I'm pretty sure they'll love Turbo: Fast.

All our favourite characters are back, and the voices are even a fairly close match*. The story lines are cute, and I like the animation (which I can be picky about). And don't worry, there are still some jokes thrown in for the grownups.

They've already got the entire first season up, and will be releasing new episodes tomorrow.

That should keep them happy until I find a copy of Frozen.

*Although, of course, there is no match for Ryan Reynolds.

** I was provided with advance screeners of Turbo: Fast for review purposes. All opinions are my own. **