My girls and I have been enjoying the Ever After High books by Shannon Hale (The Goose Girl, The Princess in Black) and were excited to find out that it was also a show available on Netflix.

What do you do when you don't want the destiny that's been written for you? That's the problem faced by Raven Queen, and several others who are not looking forward to following in their famous parents' footsteps.


The stars of the fairy tales that we all knew growing up have also grown up, and are parents themselves. Their children will be the next generation of fairy tale princesses, princes, and evil queens, and are learning how to fulfill their destinies at Ever After High. All that's left to do is sign the Storybook of Legends to seal their fates. Apple White is more than happy to become the next Snow White and live out her Happily Ever After. Raven Queen on the other hand, has less than no desire to fulfill her role as the Evil Queen. 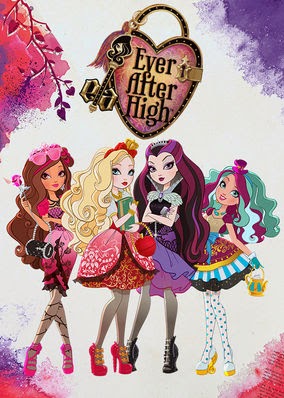 Rumour has it that if a character doesn't sign the book, their entire story will disappear, including happy endings. If it means becoming the hated evil queen, then not signing might just be a chance that Raven is willing to take.


Ever since watching a couple of episodes, including the newly released Spring Unsprung, for our Friday movie night, the girls have been pretending to be Ever After High characters (Kitty Cheshire and Madeline Hatter among the favourites).

They've even made their very own Storybook of Legends, and their favourite part, by far, is slamming it shut while declaring loudly, "I am going to write my OWN destiny. My happily ever after starts NOW!"

For a lesson like that, I'm willing to overlook the make up and ridiculous shoes.