I swear, I had a plan for today. I finally finished painting the baseboard in my writing/crafting/whatever-room-that-is-all-mine yesterday, so today I was going to start shifting things around.

I drifted off to sleep thinking about which wall the shelves with the doors should go against, and where would be the best place to find a really big table top for cheap. I dreamed that I was putting supplies away in well organised, and pretty, containers. A place for everything, and everything in its place.

Today, I moved the paint cans and trays down to the basement, and I scraped a couple of drips off the floor. Then I looked out the window for a bit. I looked at the pile of stuff in the middle of the room. I sat on the floor and played a game on my iPod for a bit. Then I left.

Hopefully, next time I go in there, I will actually pick objects up and move them. I think that part of the problem is I really don't know quite how I want to set it up yet, and I feel the need to have a plan before getting started. I also know that I'm going to have to pull shelves and things from other parts of the house, and find places to put the things that are currently on those shelves and things. It's a bit daunting, and apparently just too much for me to deal with on a Thursday.

I can, however show you the before and after of the paint: 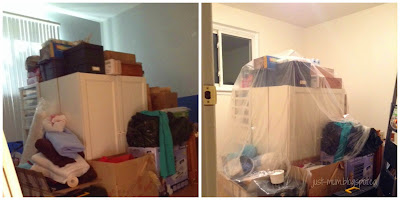 Notice the dirty grey and royal blue two-toned paint of the before, versus the lovely (very slightly) off-white of the after. I wanted to have a colour in there that wouldn't reflect too much onto whatever I was working on in there, but still had a little warmth to it. (It looks a little yellower in the picture than it reads in person.)

I really am looking forward to working in there, I swear. I'm hoping to have a better update (you know, where I've actually done something) early next week.

Here's a question for you though - any organisation tips? I'm pretty much starting from scratch in here, so any suggestions would be helpful!

Labels: all about me, around the house, bad behaviour, best laid plans, house stuff, I've got too much crap