Stop Playing in the Butter!!

Yesterday, I was a jerk. For pretty much the entire day.

It was one of those days when nothing seemed right to me. It started first thing in the morning.

For no reason I could think of, EVERYTHING was irritating. I was awful. I couldn't let any little annoyances pass without comment. I was snarking at everyone and even though my head was yelling at me to shut up, the nitpicking and grumping kept pouring out of my mouth.

Luckily, I realised what an unbearable ass I was being and, in the interest of not alienating my entire family, took myself and my shitty attitude back to bed where I lay around and wondered what the hell my problem was.

You know how little kids can be total a-holes, for no discernible reason, and then they run a fever, or have a rash, or are generally under the weather, and you kind of forgive their jerkiness because "awww... the poor little guy was getting sick!"?

Well, this morning, I woke up feeling awful. Throat full of spikes, nose running like a faucet, and a body that felt as if someone had been using it as a punching bag. I did feel relatively cheerful though.

I was so relieved. 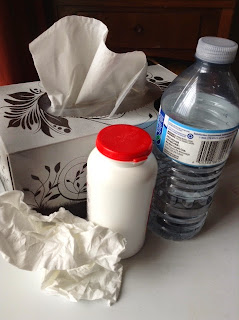 *Really though, don't play in the butter. Gross.

Labels: all about me, bad behaviour, being sick sucks