It's the first day of school, and so far, I've spent most of it doing important things like being frustrated by my unsolved rubik's cube, dancing to some Wham!, and reading a fluffy YA high school drama.

I figure that I can take the first week of school getting used to the new 6:30 wake up (B has a bus to catch this year!) and catching up on all the stuff I couldn't watch over the summer (Hot Wet American Summer, anyone?).

I actually have fun watching the kids' shows with them; there is some really good stuff on Netflix for their age group. Just last month, new episodes of Ever After High and Fetch! with Ruff Ruffman started streaming.

They also really enjoyed a new show called Project Mc2; there are only a few episodes so far, but they're looking forward to more. While I thought the girls (and their styles) were too homogeneous, it is really nice to see a show aimed at tweens, that isn't intended to be educational, where the focus is more on kids using teamwork and their brains than trying to figure out how to get some boy to like them. 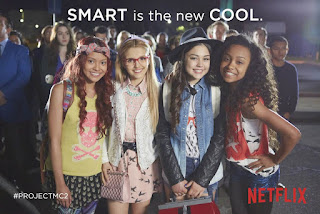 My big project at this point is re-arranging the house. My craft room is going to be the baby's room, so I need to shift some things around to make room for creating in the living room. Would you believe that I still have boxes that need unpacking? We're on year two in the house.

So here's the plan. Binge watch some of the shows I've been missing out on while emptying boxes/sorting things/purging things. It's a solid plan.

Labels: #Netflix, #StreamTeam, back to school, me time