I Started Writing This Last Week.

Apparently, I vastly overestimated my ability to get things done. My new love, tiny though she is, occupies most of the space in my mind right now. I'm sure when I get some sleep (that happens eventually, I know it does) things will start to sift through, but right now my thoughts consist mostly of wondering when I last fed her and whether or not her poop is a normal colour.

Which leaves the big kids to their own devices a bit... a situation that lends itself to an inordinate number of fights. Smart kids that they are, they know that if I'm feeding Bean, I'm not likely to jump up and come see what kind of trouble they're getting into, and there is no way on earth that I'll start yelling with a sleeping baby on my chest.

Luckily, for when I just can't take the arguing anymore, we have the basement TV.

I always said that I'd only want a TV in the living room. I reconsidered that a while ago when I realised that there just wasn't enough room in the living room for all of us to sit and watch a movie (we *really* need to fix the seating situation around here). But I didn't want to move the TV since I spend all day here, and I like to have something on while I write, and I'll be damned if I'm spending all day in a basement again.

So. We bought a second TV on a whim, to put down in the basement playroom. We didn't even hook it up for a year. It just sat there in the box, and every time I saw it, I glared and mumbled to myself about wasted money.

We finally hooked it up just before Bean was born. Thank goodness we did, because when the arguing gets to be too much, I can cave and let them watch some Netflix. Which has been happening way more often than I like to admit, but hopefully now that the baby's a little bigger and the weather is nicer we'll be getting outside more.

The problem with this, is of course, that one always wants to watch My Little Pony, while the other wants to watch Full House. We've tried a number of ways to decide who gets to pick the show, but the the one that, so far, seems to be working is that they get five minutes to pick a show. If they can agree on one within the time limit, they get to watch a couple of episodes. If they can't? Well, then they're out of luck (and sadly so am I).

They've got a few favourites that get thrown out at the last minute when they can see the possibility of TV time shrinking, because as far as they're concerned TV you've already seen is better than none at all. The top three right now are Yo-Kai Watch (which they tell me is sort of like Pokemon, but not), Mr. Peabody and Sherman, and LEGO: Friends. 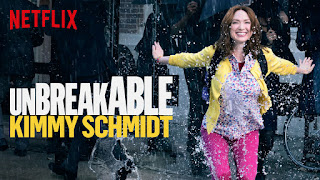 The best part of this whole "TV in the basement thing" is that they can be down there watching the same show for the tenth time, and I can be upstairs nursing the baby while watching the new episodes of Unbreakable Kimmy Schmidt!

Oh! Another one that I plowed through recently while stuck on the couch - Cuckoo. It's an odd one, but if you're into Kimmy and/or britcoms, give it a go.
Posted by Jessica at 4:37 PM