In the year 2000, I had a full time job. I was out of university, and I'd just moved into an apartment with the man who would eventually become The Husband. That was also the year that saw the beginning of the magic that was the Gilmore Girls.

I used to make absolutely sure I was home, every Wednesday night. I'd be curled up in front of my TV with a cozy blanket and a big cup of tea, ready when the music started. My boyfriend was not allowed to talk to me for that hour, not even during the commercials.

I loved that show. The writing and acting were phenomenal. The quick dialogue and quirky characters were something new that felt made for me. When it went off the air, I was bereft. There was a Gilmore shaped hole in the middle of my week. On top of that, it felt like it just... ended.

You can't begin to imagine how excited I was when I heard they were making four new episodes. 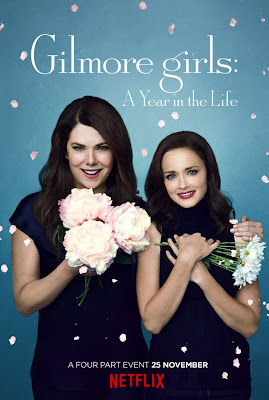 It's funny though. I started re-watching the old episodes, and they're just... different now. I don't identify with Lane and Rory as much, and I kind of get where Mrs. Kim was coming from. A husband and three kids later, I'm just not that girl anymore; although I still want to live in Stars Hollow. It got me thinking about how things used to be, and what I might tell that girl if I ran into her today. So here goes:

Hey. There are just a few things I want to say to you, while I'm thinking of them.

First, you are not cool. Don't get huffy, I don't mean that in a bad way, I mean it in the best way possible. I don't know when "cool" turned into "just like everyone else", but that is not you. Someday, when you are raising your three daughters (you heard me right) you will pass that lesson on to them and be able to show them from experience that being your own person may be harder in the moment, but it's more valuable in the long run.

Next, you know that guy sitting beside you? Don't look, don't look! Yes, him. The guy that waits for you after work, and makes you tea when you get home, and brings you flowers, and sits through shows that he doesn't really care about, just to sit with you... him. There is going to come a point where it will seem like it's never going to happen. He is going to take forever to ask. And he is going to do it in front of a freaking EB Games up at the mall. But he is worth the wait, and you're going to be able to mock him about the EB Games thing for the rest of his life. He is a good man, and he is going to be the best daddy for those three (yes, really) girls. Go easy on him.

Most important, maybe, is this: I know that you don't like to hurt people's feelings, or cause anyone any inconvenience, but stop being afraid to take up some space. You have just as much right as anyone else to the last cookie, so every once in a while, let yourself take it. You've got to think of yourself sometimes. You really do. It's not selfish, it's self preservation. It's also a good lesson for your daughters (yes, there really are three of them) to learn before they have their own relationships, or jobs, or kids to worry about losing themselves in. Don't lose yourself. It's really hard to find you again.

Take care, and stay away from green eyeshadow no matter who says it "makes your eyes pop."

P.S. Don't worry, you will get your stupid driver's license. Eventually. 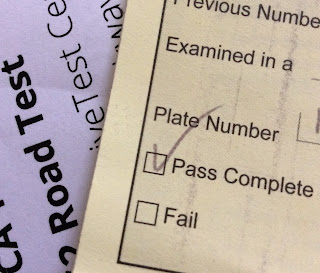 Anyhoo - I'm off to finish watching Gilmore Girls: A Year in the Life. No spoilers!

An Update of Sorts, and a Giveaway.

Wow. Okay. So it's been a while. The baby is almost 9 months old now, and starting to try walking, which is kind of terrifying because my house is in no way ready for that. It's choking hazard central here. I haven't let my sister visit with her kids since my nephew started walking because I'm scared he'll die. And yes, it really is that bad.

I've been in a fog for a while. The kind of fog where time wraps in on itself and makes all your movements slow and difficult while speeding up all the things around you. You can see things happening and know that you should want to be part of them, but you just can't care, and if you do manage to care, it just makes you sad that you had to try so hard to care. It's likely exhaustion. Maybe it's sort of like a self defense mechanism, the not caring. Things feel hard, and bad, so you just stop feeling so that you can get through it. The gist of it being that I have been performing my "keep the children alive" duties, but that's about it.

As a result, the house is even more of a mess than usual. My family... don't clean. It's like they just don't see the mess. They can step over heaps of laundry, skillfully avoid piles of sweeping, and ignore the fact that there is *actual garbage* lying around. I'm going to be kind and assume that they suffer from some kind of disorder, rather than that they're just lazy jerks.

So now that I'm finally starting to feel a bit more human, the first thing that hits me is how much I need to do just to get us back to "lived in", rather than "garbage dump". Then BAM! Mastitis! Baby with croup! Kids behaving like I'm invisible and they can do whatever the hell they want! I can feel it closing in around me again.

But I'm trying not to let it. Which is definitely something.

So. I'm making things. Making things and writing things has always helped me avoid the fog, but I haven't been doing it much since February, because... you know, baby, fog, etc. I've even signed up to do my first craft show ever in a few weeks. 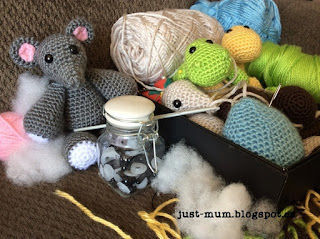 Writing is a bit more tricky. I am the most prolific when there are no people around. Which is never. But I'm going to try to *make sure* that I make the time for it, if only to keep myself sane, so hopefully we'll be seeing more of each other in the near future.

Oh! One of the things I found while I was trying to dig out my desk was a box. A box that I received a while ago that then went mysteriously missing. A box which no one admitted to ever having seen, making me feel a tiny bit crazy.  A box, that contained gifts from Netflix, including a 3 month subscription card for me to give away to one of you lovely readers!

Enter using the Rafflecopter form below for your chance to win 3 months of free streaming from Netflix! The winner will be selected by random draw and contacted by email. The winner will have 48 hours to respond before a new winner is drawn. Contest closes November 19th, 2016. This contest is open to Canadians 18+ (excl. Quebec)