The Computer Was Worried About Me.

Hi there! How have you been? Busy busy? Yeah. Me too.

More ... overwhelmed, maybe? Not getting anything done because there is so much to do. You know. That.

This here, is the "baby corner". I have definite plans to add some shelving with cute bins for all those little bits that she likes to just throw all over the entire room - often immediately after I've finished tidying them up (as much as you can call this tidying) for the fourth time. There is a spot that has been designated for this. There will even be some cushions for a little reading area. It'll be swell. 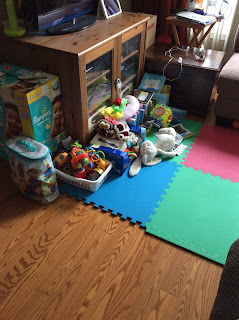 Unfortunately, that area is currently taken up with what I fondly refer to as the "garbage couch". Others seem to think it is some sort of laundry storage unit. This is where the laundry baskets get placed while I wait for a time that I can fold it. Theoretically, people will take this folded laundry to their rooms, and put it in it's proper place. ie. Drawers, or the closet. Because clean laundry doesn't actually belong under your pillow for "easy access morning dressing", Beege!

This has proven to be somewhat of a problem, as things get piled on top of the baskets. For some reason, instead of putting things where they go, they just get put out of Bean's reach. It's a thing. Oh, how we laugh. 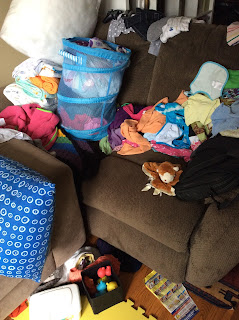 I've been trapped under this never ending avalanche of (seemingly pointless) tidying for a while now.  I am exhausted. I actually thought I was having a heart attack last month (turned out to be a gall bladder attack - they feel remarkably similar, except for the actually almost dying bit). That my body had just finally given up and didn't want to bother anymore, so it was going to go ahead and kill me. Do you know what I was thinking, while sitting in a small quiet room waiting for ultrasounds? (After the pain had stopped, and we were relatively sure that I was not, in fact, dying)

It was quiet, and there was nothing I had to do except sit there. It was practically a vacation.

I haven't been writing, either. Which, as I've mentioned before is one of the things that helps me feel a little more human. Today though, the computer monitor sprang to life as I walked by with my tea. I would usually turn it off, mumbling about rotten people who don't bother turning the power off so that it scares me when it turns on for no reason. Today though, I took it as a sign. So I sat. I wrote. And I honestly do feel a bit better.

I may even clean something.

(But most likely, I'll clear of a corner of the garbage couch and settle in to binge watch some Orange is the New Black. You're not judgey. I like that about you.)

Labels: #Netflix, #StreamTeam, all about me, around the house, being sick sucks, hard stuff, i really do love them I swear, I've got too much crap, organisationally challenged, sometimes you're just sad
Newer Posts Older Posts Home
Subscribe to: Posts (Atom)