When 13 Reasons Why started streaming on Netflix, debates began about whether or not people should let their children watch it. I think that if your kids are teenagers, you should let them watch it - but, more importantly, that you should watch it with them. 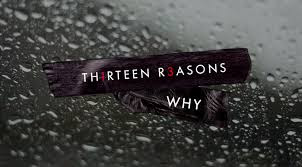 I'm guessing that high school today is probably much the same as it was when I was there. Cliques, burgeoning sexual identity, shifting friendships, introductions to drugs and alcohol - all things that are being navigated while a kid is spending less time with family and trying to figure out who they are, and who they want to be, on their own. It is hard, and it can be scary.

I, at least, felt safe at home. Today, with kids as young as 7 having their own smart phones and constant access to social media, bullying has been made a possibility 24 hours a day, and nowhere is safe. And social media isn't the only thing they are accessing - many kids are learning about sex from the internet before anyone else gets a chance to discuss it with them, and I would imagine they aren't watching videos of people having loving, respectful relations. I recently heard about a 13 year old girl who had had boys in her class demand that she send them naked pics, going so far as to say they'd kill themselves if she didn't. What is a thirteen year old child supposed to do with that? As a parent, I honestly never even considered that would be something I'd have to talk to my daughters about at such a young age.

Watching the show could trigger some negative feeling in a kid who has been through any of what these characters have gone through - feeling alone, curiosity about drugs and alcohol, confusion about their sexual identity, assault, suicidal thoughts - but that's an even more important reason to watch it with them. Talk about it with them. Listen to what they have to say. You may not even know that your child, or a friend, is experiencing these things; here is an opportunity to open the discussion. Give them a chance to ask for help.

If ours are lucky, and not the kids that are suffering, it is an opportunity to open their eyes to the fact that others might be. To remind them to take a moment out of their day to ask someone who looks sad if they are okay, maybe offer to talk. Just being acknowledged can make a kid who is on the edge step back. At the very least, we can remind them to stop for a moment and consider how their actions might be affecting others.

Not only does it give us a chance to talk to our kids about what they can do when something goes wrong, it gives a chance to talk about the choices that they will be faced with and how best to navigate them. Just because they don't necessarily tell us that there is alcohol at parties they go to, or that people they know (if not they themselves) are having sex, it doesn't mean it's not happening. Even if they're rolling their eyes and muttering under their breath, some of what we say sinks in. So let's talk to them about healthy sexual relationships, and how to gauge their feelings and trust their guts.

I also think that it's important for kids to see the aftermath of Hannah's decision to end her life. To see the confusion and heartbreak her parents felt. To realise that although her teacher was no help, that there were other avenues she could have pursued. To know that although she felt helpless, it could have gotten better. They need to see past the end of her life to what could have been and realise that there is likely more for them than they know as well.

Definitely watch it for yourself first. Prepare yourself for the topics that will come up so that you know what you're in for. Decide for yourself whether your children are mature enough for it. I think that part of the problem comes when we don't realise our kids are already growing up. We want to shelter our kids, and let them stay innocent of the garbage that happens out in the world, but we can't. Every time they walk through that door without you, they fall under the influence of people and media that you can't control. They are aware of so much more than we think they are. I really think that when a show like this comes along, giving us an opportunity to open the lines of communication about these difficult topics that will get even more difficult to broach as they get older, we should take it.

If you'd like more of an idea of what you're in for before you watch, check out this review on Common Sense media.

If you're in Ontario and looking for information about support for assault victims, the Ontario Coalition of Rape Crisis Centers is a good place to start.