What's that sound? It's... nothing. It's the air conditioner running, and the fridge chugging along. It's quiet... and it's... beautiful. Bean has finally settled in her crib for a second (attempt at a) nap, and Beege and Kee have managed to agree on something long enough to take their butts outside for their mandated 20 minutes of outdoor time.

The kids have been home for a week now (oh god, has it only been a week?!), and since the bell rang on the last day of school, I have not had a moment of peace. From the second they get up, til the moment I manage to get them to finally close their doors and stay in their beds, there is noise. There is bickering, giggling, clicking, tapping, humming, singing, yelling, whining... it's not even all bad, it's just a *constant* stream of sound washing over me. Sadly, I am a person who really, really needs some quiet. This summer, I thought I'd try to impose a little structure so that I would get some.

I printed out a "Summer Rules" list that I found at Thirty Handmade Days. I made them each one and laminated them so that they could check off their lists everyday to keep track of finished activities. 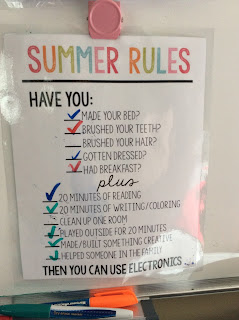 It has actually been going surprisingly well.  The main problem is that they're pros at finding loopholes.

For example, If you go build something outside with your sister, who is scared to go out alone because a cat might attack her (yes, really. I'll get to that later), surely that counts as Playing Outside, Making/Building Something Creative *and* Helping Someone in the Family... right? No. Although, I suppose *technically* it does? No, no it doesn't. They're also counting things like shutting a cupboard the other one has left open as "helping someone". Again, technically? I suppose so, but it's not really in the spirit of the thing.

What I was really hoping was that it would take them most of the day to finish their lists so that we could all curl up on the couch with a movie on Netflix as soon as the baby went down. The reality is that they've both used up their screen time by lunch. And while I have caved when they suggest something like the new Netflix Interactive Storytelling (Their favourite is Puss in Boots), because while it is *technically* screen time, at least they're *technically* doing something creative..? Yeah.

So, everybody hit me with your free (or close to) ideas to entertain the kids for the summer. (Keeping in mind that I have neither pool, nor trampoline.)

Posted by Jessica at 7:51 PM No comments: