Apparently, it's Halloween this weekend. Or next week? Whatever. The point is, it is very soon, and I have not given more than half a second's thought to costumes, candy, or decorations.

I used to *love* Halloween. Parties, candy, movies, costumes? Awesome. And once kids came along, making their costumes was one of my favourite things. For the past few years though... not so much. Very Pregnant me just wanted to go to bed early. New baby in my arms me just wanted *everyone* to go to bed. Last year, I sat on the front stoop to head off the trick-or-treaters before they got to the door and rang the bell, so as not to wake the not-quite-as-new baby who took forever to settle.

This year? I plan to leave some candy at the end of the driveway, turn off all the lights and binge watch something while Husband takes the kids out. Because I am a horrible Halloween grinch.

But. As many of you know, I am also a neurotic person who probably shouldn't be watching scary movies alone in the dark when there is the distinct possibility of strangers, possibly dressed in scary costumes, knocking on my door to tell me my candy bowl is empty.

So, I have come up with a list of Halloweeny, yet not terrifying things to watch.

First up: The Babysitter. A movie that, while classified as horror, is so ridiculous that I will not be having nightmares. 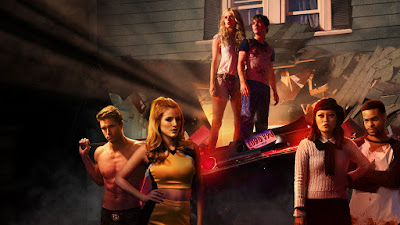 Next up: Little Evil, because who hasn't wondered every once in a while if their kid was the Antichrist? 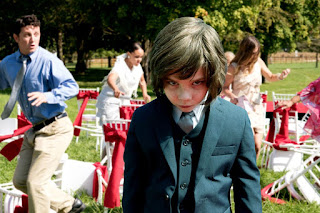 Then, if I haven't fallen asleep on the couch under a pile of fun sized chocolate bar wrappers, I can round out the night with some Scream Queens and/or The Santa Clarita Diet. Both of which somehow manage to be extremely sweet and charming, despite all the murdering and the copious amounts of blood. 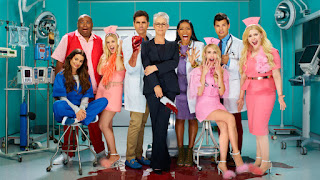 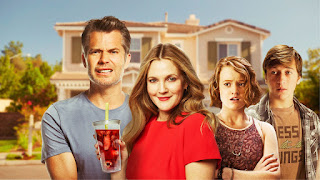 Hopefully, by next year when Bean is ready to head out and bug strangers for candy, I'll be ready to get back into the whole thing. For now, I'll be perfectly happy ignoring everyone and watching grisly, yet somehow comedic, murders on my couch.

What are you all doing?

Posted by Jessica at 2:07 PM No comments:

Labels: #Netflix, #StreamTeam, all about me, Halloween, What I'm Watching

Being the mum (in my house anyway) means that responsibility for things like birthdays generally falls to me. Which is fine, because although it's exhausting, I actually do like doing all the set up and organising for the kids' parties. (Actually *attending* kids' parties is a whole other thing, but we'll talk about that some other time.)

And let's face it...  kid birthdays can be easy. All they really want is cake, a few presents, and people who love them. Add some balloons, maybe a movie, and a happy birthday from the characters of their favourite show (Beege is going to be super stoked to hear from Pikachu), and it is an awesome birthday. 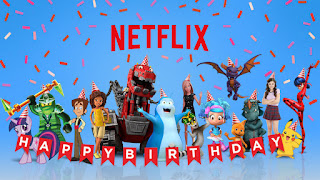 The only birthday that I really have a problem with is mine*.

I spend all my time planning, remembering, and doing things for everyone else. It would be really great if I didn't have to do it for *one day*. And since I'm the one who does all the planning... for my birthday, nothing happens. Because I don't remind them. Which... kind of sucks. Anyway. my birthday is coming up, and I've lowered my standards. What I'd like for this year is to not have to do a single thing for anyone else.


Oh, and if Netflix is taking suggestions for some more birthday greetings - Sherlock would be nice.

*Although Husband's birthday is getting a bit harder since he just buys what he wants for himself, and/or never actually tells me what he wants.